SpaceX's Historic Next Launch Next Monday Victim of Coronavirus

According to Teslarati news, SpaceX's next launch has been postponed due to the travel restrictions from the worldwide Coronavirus panic.  The mission is to launch the twin of an Argentine satellite that SpaceX launched in October 2018.  It appears to be the first launch from the Cape Canaveral/Kennedy Space Center complex to be delayed by the virus.


Previously expected to launch as early as March 30th, the ~3000-kg (6600 lb) SAOCOM 1B radar satellite departed its Bariloche production facilities and arrived at Cape Canaveral around February 23rd, around the same time pandemic impacts began to be felt outside of China. Now likely sitting in a SpaceX payload processing facility at Cape Canaveral Air Force Station (CCAFS), it appears that SAOCOM 1B will have to wait for the foreseeable future before teams from Argentina and other countries are able to access the spacecraft and prepare it for launch.
...
Shortly after the growing global pandemic began to bare its teeth, the Argentinian government made the decision to almost completely ban international travel for the time being, while citizens now face heightened restrictions in a bid to legally enforce social distancing precautions. A scientific satellite launch has unsurprisingly not won exemption rights, meaning that it’s now all but impossible for the Argentinian space agency to send people and supplies back and forth from Florida – a necessity for something as complex as a satellite launch campaign.

But Historic?  This is a fun aspect of the launch that has had me waiting for this one since February 21st when I heard of it.  This launch is into a polar orbit and the launch will be toward the south; so potentially right overhead here.  The last launch into a polar orbit from Cape Canaveral was in November 1960, and caused an international incident - with Cuba.  (I swear I'm not making this up.)  Polar orbit launches have been prohibited from the Florida launch sites since then.

“In what somewhat inaccurately became known as “the herd shot around the world,” some..falling rocket debris apparently splattered on a Cuban farm and killed a cow. “This is a Yankee provocation,” accused Revolucion, an official Cuban publication, insisting that the rocket was deliberately exploded over the country. Government radio stations cited the incident as further proof that the United States was trying to destroy the regime of Cuban President Fidel Castro. One cow was even paraded in front of the U.S. Embassy in Havana wearing a placard reading “Eisenhower, you murdered one of my sisters.”

Castro filed a complaint at the United Nations, and Washington sheepishly conceded the possibility that “fragments from the rocket booster” could have landed in Cuba. CIA Director George Tenet later quipped somewhat tastelessly that it was “the first, and last, time that a satellite had been used in the production of ground beef.” Further launches overflying Cuba were postponed, and improvements were made to the Cape Canaveral range-safety system. In any case, it was a dejected NRL group that returned to Washington.”

I said potentially overhead?  It gets better.  The 6600 lb payload is considered light enough for the Falcon 9 that the booster – I assume it's reused – will be able to perform a Return to Launch Site (RTLS) recovery, touching down at one of SpaceX’s two Landing Zone (LZ) pads on the Cape.  Depending on the exact trajectories the booster could go overhead on the way back, too. 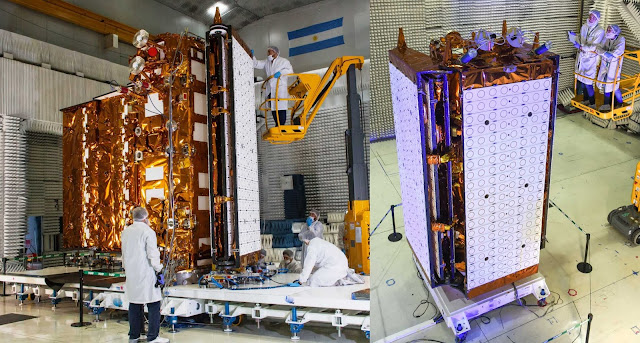 SAOCOM 1B during checkout in Argentina before transport to the Cape.

Because of the restriction on launches into polar orbit, SAOCOM 1A was launched from Vandenberg AFB in California.  Exactly why the mission has been approved hasn't been commented on, but Teslarati author Eric Ralph noted:


While Falcon 9’s upper stage will still technically overfly Cuba over the course of the launch, the combination of a rare ‘dogleg’ maneuver shortly after launch and the fact that said upper stage will be far above the Earth’s surface have effectively mitigated any technical or legal showstoppers. 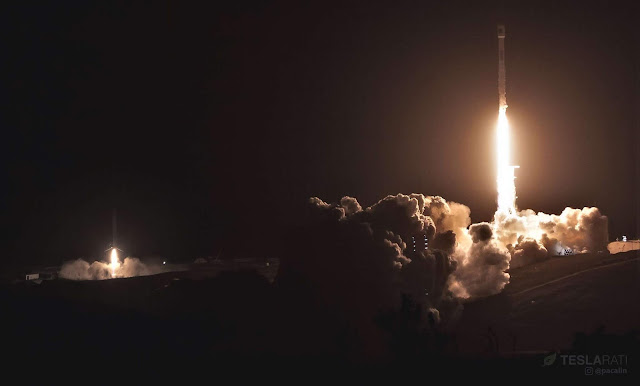 By leaving a camera on a well placed tripod and taking a couple of exposures, photographer Pauline Acalin got both the launch of SAOCOM 1A and the booster landing.

Teslarati has made a statement that I honestly think has never been said in the English language before - if ever on the planet.  SpaceX is building satellites faster than they can launch them - referring to their Starlink satellites.  They build 4-5 satellites every day, and at current launch rates are building at least 20-40 extra satellites for each batch of 60 it launches.

The next Starlink satellite launch was going to be around the middle of next month, judging by the roughly three to four weeks between launches so far this year.  There has been no announcement, but if they have the hardware lying around to move that launch forward, I'd be less than surprised to see SpaceX put up another 60 Starlink Satellites sooner than that.

The next launch is an Atlas V, this Thursday afternoon, carrying a military communications satellite, the sixth and final one of the Advanced Extremely High Frequency satellites AEHF 6.