At one point in my late 20s I had decided I wanted to learn how to juggle.  In the days before there were lessons for everything on YouTube or on someone's blog, this meant specialty books.  Word got around, and I was gifted a book that explained how to get started and included props to juggle.  I learned to juggle three things at a time (practical advise: don't try tennis balls or something that's going to bounce away when you drop it; stick with something that just sits there when you drop it like small bean bags).  As with many physical skills, like falling off a bike or falling on my face, I find I can always remember how to do it with a few minutes of practice.

I still juggle things in life, and this time it's projects.  One project is the Webster internal combustion engine that I've been making very little progress on (last update).  Let me start with the hardest part to measure, the cylinder.  In that last post, I say that I had found that the cylinder was tapered so that the combustion chamber end was narrower than the entrance end, so that if I could get the piston into the cylinder, it would be looser in the important zone.  It seemed to me that the best course would be to make the cylinder wall straight but if I had to live with a mistake, it would be better to have the end opposite the combustion chamber wider.

I had measured it before and wanted to verify the measurements so I retook all the measurements and found no mistakes from the last time I measured, which is a good thing.  I set up the lathe to carefully trim the inside diameter of the cylinder. I made a cut that should have taken .001" diameter off the first 3/4" of an inch of the bottom.  There was virtually no metal taken off - it looked more like dust than chips.  I thought I must have made a mistake setting up, so reset the tool to the start of the cut and set it to take off another .001".  Again, no evidence of chips, just some fine scrapings of dust.  The micrometer and telescopic gauge were telling me the same number for diameter, saying I had not cut it at all.  This went on a few more times until I had to think even I couldn't be that screwed up and the settings on the lathe couldn't possibly be right.  Still no evidence of cuts.  I stopped trying to cut, thinking I'd eventually mess it up if I kept going.

After a few days of trying to figure out what was going wrong, I took a look at my boring bar.  It's not a typical steel tool; it uses a carbide insert (like this but not this).  I looked at the cutting point with a 10x magnifier and thought it seemed too rounded; perhaps the cutting edge was pushing the steel away from the tool at the contact point rather than shearing some off?  I pulled the screw holding the insert down, turned it to a fresh corner and without changing the cutting tool from where it was set, started a cut.  Instantly, I could see chips coming off, and before the tool had cut 1/8" saw it was taking off too much.  After some resetting, I got a bell mouth by about .002 to .003.  In an exaggerated sketch, it's like this: 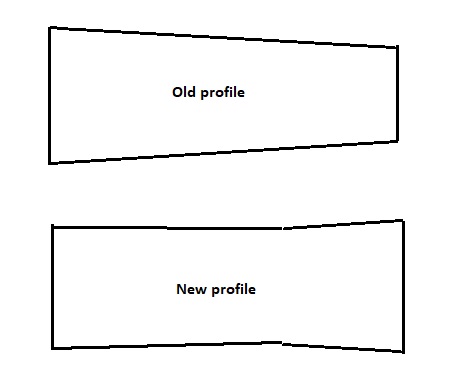 Last weekend, I had ordered replacement piston rings for the two I broke - and two spares.  After a couple of days of consistent measurements of the cylinder, I took it off the lathe and put the piston back.  Yesterday, I addressed the single biggest problem I had seen with the piston: the grooves were too tight and the ring wouldn't go to the bottom of the groove.  Using the same cutoff tool I used to cut the grooves, I got my positions reset and took off .002 of width on each ring's groove.

You can just see a little light under the ring in each groove (the rings are called out at 3/32" wide but measure a little short of that: 0.090".  I haven't tried to install the rings, yet- I want to remeasure another dozen times since I don't know how to remove a ring if it's not right.

The other task I've been working on is my semi-annual task of cycling and recharging the bigger storage batteries we have.  My six year old AGM battery looks like it has lived out its life and needs to be replaced.  There's a "date sold" sticker on top that says 1/5/14.  The last time I did this wasn't six months, it was 11 months ago - last April.  When six months rolled around, we were still working on the lightning strike repairs and some car issues.  I put it on the ToDo list and just kept forgetting to do it.

I finally got around to it around the start of last week and have had a lot of issues getting it to run clean test or two on my Computerized Battery Analyzer. 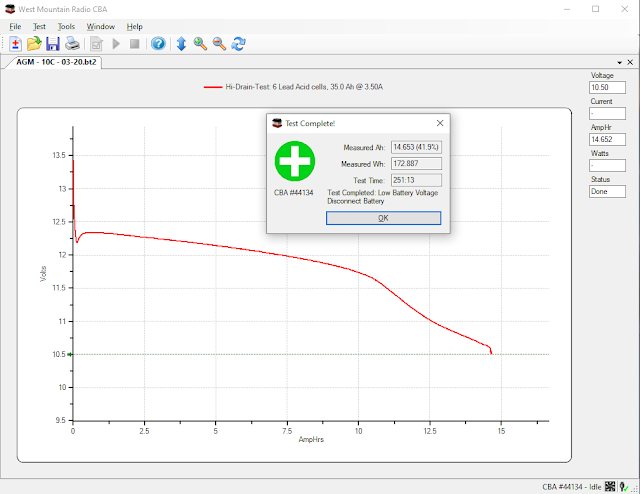 This is a high current discharge, but a pretty standard rate of 1/10th the battery's capacity (called C/10 rate).  Discharges at more gentle rates, like C/20, have a similar shape and that dip in the curve just to the right of 10 AmpHrs is abnormal.  This test completed with a measured capacity of 41.9%.  A retest had some other oddities and ended up at 39.3% of capacity.  I consider anything less than 80% to be a bad battery, although it's clearly holding some charge so not completely worthless.  This is part of our hurricane preps, so I really want every Amp*Hour I can get out of this.  In fact, I might want two or three of these.

As others say, sometimes I'm so busy in retirement I don't understand how I worked for a living.  For sure, most of it is that I worked on their priorities not mine, but some of it is also that I'm sure I move slower than I did while working.