A really fundamental idea that underlies the entire discussion about shunting lightning to ground is just what ground is and how to get effective grounds.  It’s really a broad discussion because there are safety grounds for AC power, circuit grounds for the equipment, and lightning grounds.  They can all be the same thing, but they don’t have to be.  In some parts of the world, this is called earthing, but that word is now being co-opted by people who think walking barefoot on the ground will heal every health issue they have.

It’s no secret I come from the world of commercial aviation electronics – avionics – and that I’m a radio frequency (RF) designer.  The fundamental difference between being an RF designer and a “plain old” analog designer is that we have to think of everything in terms of its electrical length; the proportion of the size of anything to a wavelength.  Anything means anything; wires, traces on circuit boards, component sizes, anything we deal with.  Let me tell you the world’s worst-guarded secret: nothing on an airplane has an earth ground.  No aircraft spools out miles of wire to a ground rod stuck eight feet in the ground.  Since a ground that’s farther than about 1/10 wave away isn’t really effective as a ground anyway, virtually everything on the airplane uses the concept of electrical common as ground.

When an airplane gets hit by lightning, the entire body changes potential with respect to Earth when the electrons in the lightning go into the body.  Since everything electronic onboard is referenced to that common potential, they stay the same amount above that potential.  I don't have hard numbers, but commercial airliners are hit around once every thousand hours of flight, once a year on typical routes but more often in the tropics, and generally aren't damaged.

If we're going to talk about lightning in RF terms, what’s the wavelength of lightning?  Since wavelength is just another way of describing frequency, and many people would say, “it’s DC, how can it have a frequency?” I should address that.  Here’s a question to answer that question: if it’s DC why do you hear it on your radio?  The voltage and current of the strike over its duration goes from nearly zero to full 10s of thousands of volts in a time interval that’s fast to a person but glacially slow to electronics.

Lightning has been studied as long as people have been on this planet, and the measurements have gotten more refined with technology.  For the purposes of trying to have common science to base designs on, there are common models for lightning.  In the aviation world, the industry has agreed to specifications that they’ll require equipment work through.  Take a look at these sample pulses that electronic assemblies on a commercial airliner are tested to. 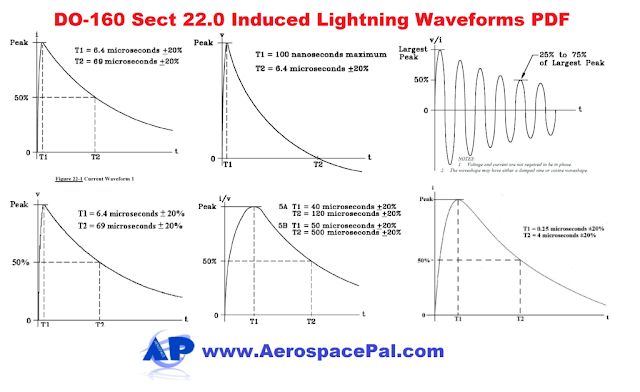 The rise times have been characterized as ranging from 100 nanoseconds (1/10 of microsecond) to as long as 120 microseconds, 1200 times the shorter duration.  However, these aren’t periodic signals, like a radio carrier; these are impulses that appear a small number of times and then are gone.  To really grasp their wavelengths, we need to perform an operation called a Fourier Analysis – the common digital algorithm used for this is usually the Fast Fourier Transform.  A useful rule to recall is that the narrower the pulse, the broader the spectrum the signal uses, so there’s no unique wavelength to cite.  It’s simply not realistic to assign one frequency to lightning events, with the only exception being the top right plot which is a decaying sine wave.  Lightning is a low frequency phenomenon with its energy primarily below the AM broadcast band, often in the “few hundred” kilohertz range, which is why you can hear it on an AM radio.  You hear a combination of the harmonics of the fundamental frequency of the lightning and the broadband noise resulting from the impulse.  The decaying sine wave (upper right) doesn’t show the timing of the wave, but it’s a broadband signal that presents energy as high as 10 MHz.  The other waveforms are regarded as lower than 2 MHz.

The caveat is these waveforms come from studies of the effects of the cabling on an airplane, which reduces the peak voltages or currents and spreads the pulse out over time.  It's arguable that the decaying sine wave at upper right isn't something seen in a strike, and is the effect of the cable itself.  Since the electrical length of a higher frequency is shorter than that of a lower frequency, anything designed to handle the higher frequencies will work for lower frequencies.

Another important point about grounds is You Can’t Have Too Much Ground.  Consequently, instead of one ground rod for the entire house, like the electrical code says, one of the standard plans for grounding a tower is to have three 8’ ground rods equally spaced around the legs of a tower (virtually all towers are three-legged).  Think of this as a minimum.  This is a rendering of that concept with a model of my tower installation. 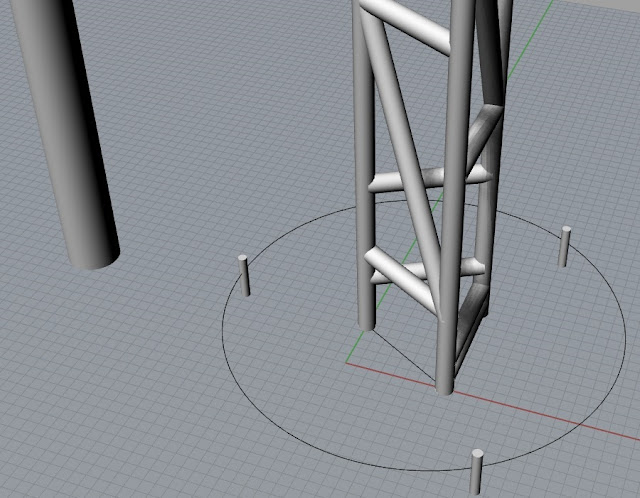 Since my tower cranks over, when I put the system in, I used the steel pole that the held the winch as the left one of those grounds.  Like all steel does around here, that rusted and I replaced it with an aluminum pipe in ‘16 – which ended up even farther to the left in this image.  That pipe is connected as one of the grounds.

Remember how I said you can’t have too much ground? An effective addition to this layout is to run wires from each of the ground rods a few inches below the surface in the soil. Bare wire is best. Two or three wires from each rod with perhaps 60 degrees between them is probably all you’d be able to run.

It’s true that a wide copper strap is better than wire, but wire is more convenient to obtain and I've never seen enough hard numbers to justify going for it.  My tower legs are connected to the copper ground pipes by #8 stranded copper wire.  As part of the spring cleaning, I renewed all those connections so I started with shiny copper and aluminum, coated everything with the anti-seize compound and replaced the old wires.  This is the side closest to the house, and you’ll notice a second wire, red, heading out of the picture.  This goes to another ground rod, directly below where the cables enter the house. 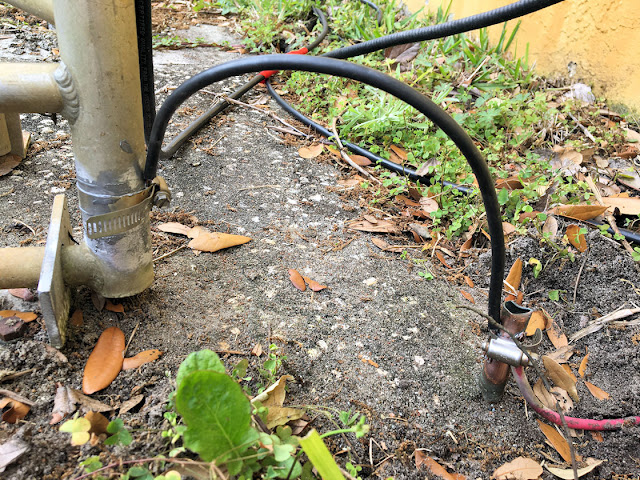 You’ll notice I said copper pipe and not a typical copper-coated steel ground rod; this might be another “do what I say not what I do”  because I'd be pretty sure what I did doesn't meet code.  It’s my calculation that the copper contributes far more than the steel does to the conductivity to ground.  Copper is 40x more conductive than good steel, much more than 40x better than some kinds of steel. It's my belief that the steel is just there for mechanical reasons; the steel makes it easier to pound into the ground.  With our (mostly) sand soil, I can jet water from a garden hose through the pipe into the ground and sink it so fast that sometimes it’s almost like it’s falling into the ground.

How long can the ground wires be?  The fundamental relationship of wavelength and frequency is that when multiplied together, they equal the speed of light so wavelength equals the speed of light divided by the frequency (be careful of your units here).  We’d like to make our grounds shorter than 1/20 of a wave.  That decaying sine wave that we looked at above presented energy at 10 MHz.  I'm going to cut that in half, to 5 MHz, and still think we'll never see anything that high.  One wavelength at 5 MHz is 60 meters, and 1/20 of that is 3m or 9.8 feet – call it 10’.  This doesn’t mean that no wire in the station can be longer than that.  First off, both the cutoff frequency I used and the 1/20 wave are a bit arbitrary.  I could have just as easily said 1 MHz, making that 49’, and covered all but some very rare lightning strikes.  But in the case of the tower, those black wires (one on each leg of the tower) are not even one foot long to ground.  The gap from these two grounds to the one closest to the house is about 8’.  The distance from that third ground to the radios inside the house is less than 5’.

What I’m trying to say here is “don’t let perfect be the enemy of good enough.”  If your distance to ground is 11 feet, it will never make a difference.  Some people say 1/10 wave instead of 1/20.  I’ve said it myself many times but the only times I’ve seen 1/10 vs. 1/20 make a difference was with high powers and lightning is nothing if not high power.

It is possible to design radio installations to survive a direct lightning strike.  Cellphone towers get hit all the time.  Broadcast radio and TV stations do, as well as virtually all public service radio systems do as well.  Tons of remote stations do.  Will mine survive?  I don't know.  Once again, I refer to the ARRL book I mentioned in part 1, “Grounding and Bonding for the Radio Amateur” by H. Ward Silver, N0AX.  This week's update was to fix a weak spot I had overlooked before.  A sobering reality is that the commercial radio services I just described get taken out by lightning, too, and that's partly because lightning strikes don't come off an assembly line.  “Like snowflakes, no two are exactly alike.”

EDIT 3/15/20@1715 EDT:  Commenter Eaton Rapids Joe raised some questions about the middle of the post, where I discuss the wavelength of lightning.  To be honest, I looked at it with fresher eyes and really thought I did a bad job with that.  There are substantial edits to the middle of the piece (paragraphs 5&6 as seen here) to improve the accuracy, and numerous "word smithing" changes that I did to try to reduce chances of misinterpretation. - SiG