Amid the Cost Overruns and Schedule Slips

According to Spaceflight Now, NASA is closing the facilities involved in testing the Space Launch System (SLS) heavy lift launch vehicle and the Orion crew capsule, in both Louisiana and Mississippi.  The reason is Coronavirus and "work from home" guidelines.


At Stennis, NASA and Boeing teams were readying the core stage of NASA’s Space Launch System for a series of critical tests in the coming months, culminating in a test-firing of the rocket’s four main engines that had been scheduled for early August. With the shutdown of Stennis, that testing will be delayed.

SLS core stages are manufactured at the Michoud plant in New Orleans, and pressure vessels of Orion crew capsules are welded there. The SLS and Orion vehicles are the centerpieces of NASA’s Artemis program, which aims to land astronauts at the moon’s south pole before the end of 2024, a goal that was already widely considered ambitious.

The agency is keeping as much emphasis as they can on two upcoming missions with hard deadlines.  The first one depends on interplanetary timing, because it's set to launch during the period before the next closest approach to Mars that shortens the flight to its minimum length.


Lori Glaze, head of NASA’s planetary science division, said the Perseverance rover remains on schedule for liftoff during a limited 20-day window opening July 17. If the mission — also known as Mars 2020 — misses this summer’s launch window, the next chance to send the rover to Mars won’t be until 2022, a delay that could add to the $2.5 billion mission’s price tag.


The Webb telescope is currently scheduled for launch in March 2021, but officials are expected to reassess that schedule in May after recent delays in testing at the observatory’s Northrop Grumman factory in California.

In a separate article on the Coronavirus shutdown changes from NASA I got a chuckle from a contrast between two NASA centers.


Earlier this week, the director of NASA’s Michoud Assembly Facility in New Orleans introduced mandatory telework for non-essential workers. Robert Champion, Michoud’s director, said in a statement Monday ... “Access to the facility will be restricted to mission-essential personnel only, as defined in the response framework and by your company leadership.”
... and...
Officials at NASA’s Jet Propulsion Laboratory in Pasadena, California, where many of the agency’s interplanetary robotic missions are built and controlled, announced Monday that only non-essential workers there would be allowed access to the facility. [BOLD Added: SiG]

That right there is funny.  The JPL controls the Voyagers and other deep space probes.  The people doing the controlling are essential but they're kept out of the lab because they'll be able to access their control consoles while working remotely.  I don't know what qualifies as non-essential there, but not counting the cleaning staff, maybe people who touch real hardware?  The mock-ups and prototypes they use to debug things?  Michoud Assembly Facility is part of the Stennis team that's testing the SLS.  They will ensure all the hardware is made safe and then only people qualified to touch that flight hardware will be allowed in. 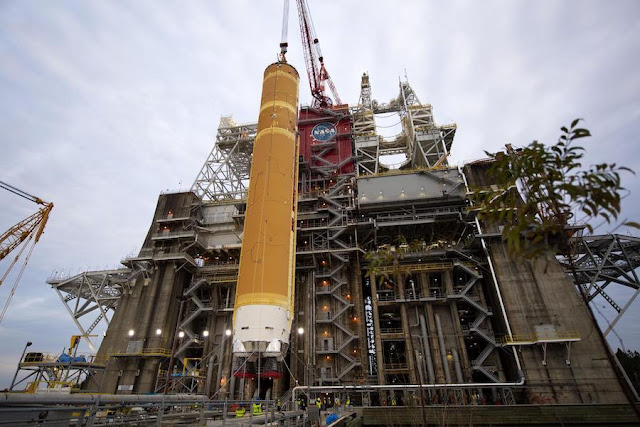 The SLS booster core (without strap on solid rockets) being lifted into the test stand at Stennis. NASA photo.