The Law of Unintended Consequences And Unaskable Questions

Economist Stephen Moore from the Heritage Foundation was on some show I was watching within the last week and talked about some of the impacts of the economic hole that's being dug in response to the Kung Flu (no, he didn't use that term... unfortunately).  That started a background processor in my head where I think about things without realizing I'm thinking about them, except that every now and then the background process interrupts my daily life and either asks for something (usually more input) or tells me something.

As I said two days ago:


To be honest, the response to the Coronavirus scares me more than the virus does.  The only scary thing about the virus is that it reproduces.  Eventually, everyone gets it and gets over it (or not, whether the fatality rate is 1% or 3% or 0.2% is still hard to know); the essence is that it's still self-limiting in the long run.  Gradually, the population develops immunity to the virus and the toll lessens.  The reaction of sending everyone in the country a "four digit" check is terrifying.

As an economist, Moore put it more succinctly.  There's a cost associated with our response.  That one piece of proposed legislation (still being haggled over in congress) is estimated to cost north of $1 Trillion.  In that linked piece, Karl Denninger says that could be needed monthly.  Not one single debate or conversation has been had about this and someone needs to ask something about how much we're spending and at what cost is it too much?  It's a difficult question because it's dealing with so many unknown quantities, especially touchy questions like how many lives we're saving and how much one life is worth.  What if to save a live costs a life?  Or to save one costs two?  There's simply no way to know to how many lives can be saved because all we have is various models of the important characteristics of the virus and those models don't seem to be doing very well at explaining the things we're seeing.  For example, we need to know how deadly the disease is; one of the fatality rate measurements.  Look at the chart at the bottom: 34 countries, no two with the same rate.

We are shutting down vast sectors of the US economy, and even broader, almost the entire Western World's economies.  Opinion writer Leon Wolf at The Blaze brings a lot of smart in a few simple paragraphs.


I suppose it's entirely possible, and even probable, that the current extraordinary measures being taken to combat the spread of coronavirus are necessary to prevent significant loss of human life. I'm not here to argue that point, and I myself am participating in social distancing, which is being advised by the experts.

But there's another side to this coin that isn't being adequately discussed, or even discussed at all, at least as far as I've seen. And that is the fact that the social distancing measures currently being imposed across the globe are also going to cost lives. Perhaps quite a lot of them.

What we're doing is going to cost lives?  How?  Let's start with the obvious.  I think everyone knows that the greatest health risk is poverty.  No, not because rich people get treated better, but because they're generally better educated and take better care of themselves.  Simply, the more wealth people have, the longer they tend to live, and the fewer health problems they tend to have.  It's as true for nations as it is for people.

The response to the virus is destroying wealth like crazy.


And when I say "wealth," I don't just mean that the wealthy are going to lose money; in fact, lower-income people across the globe are likely to bear the brunt of the coming economic contraction, as they are the ones most likely to be laid off from industries that rely on person-to-person contact, like food, leisure, and travel.

You've probably heard other people predicting this will go past recession to full depression level contraction of the economy, bringing the wholesale destruction of wealth we associate with depressions.

Up in the third link, Karl Denninger on the Market Ticker does a long piece on this.  If you haven't yet read anyone saying this leads to total economic collapse and all the things that come with that, go read Karl.


How many lives is it going to cost? I don't know. I can't quantify it and don't have the resources necessary to make even a reasonable guesstimate, to be perfectly honest. But it's going to be some, and potentially quite a few.

Will the social distancing measures we are putting into place save more lives than they are going to cost? I don't know the answer to that question, either. But it bothers me — and it should bother us all — that no one who is in a position to find the answer is even bothering to ask the question. 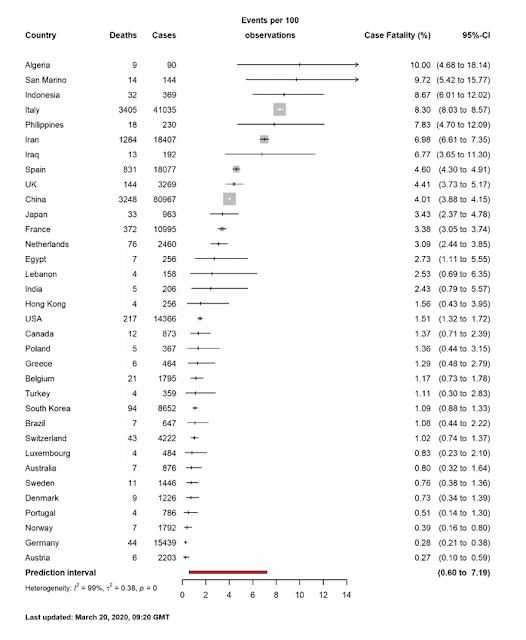 Case fatality rate for Covid-19 from The Centre for Evidence Based Medicine.  There is no One Number to plan by.