The Role of Overregulation in COVID-19 in the US

This morning, Peter Grant at Bayou Renaissance Man ran an in-depth piece on the virus.  What struck me, because it's one of the things I always harp on, was a comment by reader Ray - So Cal on the role of Fed.gov overregulation in the situation we find ourselves in.  He linked to an article on City Journal by Roger Klein, MD, JD; both Medical Doctor and Juris Doctor - lawyer.

Dr. Klein starts by discussing some of the situation in King County, Washington, where COVID-19 has been confirmed in the coronavirus-related illnesses of ten residents—six of whom have died—and who may have infected more than 50 residents and staff.  The virus has been confirmed in more people in various places around King county, and the data led investigators to hypothesize that the coronavirus had been circulating in the state for six weeks.  It's troubling this wasn't confirmed sooner.

It turns out that at the root of this is something we talk about regularly on these pages, overregulation.


Overregulation of diagnostic testing has played a major role in this delay. For weeks, the CDC operated the nation’s sole diagnostic laboratory for coronavirus, while testing in the rest of the world proceeded apace. Test protocols using the polymerase chain reaction (PCR) were publicly available shortly after Chinese researchers published (or described) the sequence of the virus in mid-January. The World Health Organization (WHO) used a freely available German procedure to create a test kit, shipping 250,000 tests to 159 laboratories worldwide. Since early February, the WHO has facilitated specimen transfer to referral laboratories.

In China, labs have tested thousands of patients each day. By February 23, the Chinese government had approved ten test kits, and production capacity reached 1.65 million tests per week. Meantime, South Korea has more than 500 testing sites and has screened over 100,000 people, reportedly testing 10,000 individuals per day and pioneering “drive-through” testing facilities. This enhanced testing capability is a key reason why the country has reported over 5,100 cases—the second-largest, outside China—including larger numbers of patients with mild illness, as reflected in a case fatality rate less than 1 percent. As of March 3, the U.K. had tested nearly 14,000 cases.

By contrast, the U.S. had performed a paltry 472 tests by March 2. Further, CDC testing criteria have precluded recognizing community spread because of requirements stipulating recent travel to China or exposure to an infected person. Adherence to these guidelines delayed testing in the first probable case of community transmission, in Northern California, by four days. [BOLD added: SiG]

Despite the widespread availability of tests in China, South Korea and so on, the US would not allow those test kits into this country.  It took until February 4th and Health and Human Services (HHS) Secretary Alex Azar’s declaration of a public-health emergency before the Food and Drug Administration (FDA) would issue an Emergency Use Authorization (EUA) to the CDC, allowing it to distribute its own test kits to designated public-health laboratories.  Test kits from other countries were still prohibited.  The CDC began shipping their kits the next day, February 5, but laboratories couldn't use the kits because they contained a defective reagent.  These test kits contain a “negative control” intended to yield a negative result when tested, and which protects against false-positive results from contamination or other issues.  The negative controls in some kits tested positive, invalidating tests done with them and saying the test kits were bad.

In light of the defective test kits from the CDC, the FDA could have authorized test kits produced by commercial laboratories but the agency has prohibited what they call Laboratory Developed Tests (LDT) in the US.  In contrast, over in Europe, several companies, including at least one that's U.S.-based, are approved to sell test kits.  When time is critical, as it clearly is in the early days of a building epidemic, the FDA has what's called “Enforcement Discretion,” through which they can essentially look the other way and allow the sale of LDTs in the US.  They chose not to exercise that discretion, adding further delay.


Stephan Hahn, the FDA commissioner, predicted that U.S. laboratories will be able to perform “close to 1 million” tests by the end of this week, and former commissioner Scott Gottlieb estimated that public-health laboratories “will be able to test 10,000 samples a day, with as much as an additional 10,000 a day from academic labs.” Even if true, these optimistic predictions are likely too late to reverse a crisis that might have been averted.  [Note: to save you the effort, 20,000 tests/day (10k each from public health and academic labs) is 140,000 tests/week, far short of commissioner Hahn's “1 million tests” by the end of the week]

In a situation where timing can be everything, the FDA's slow motion action is undoubtedly going to lead to more people being identified with the disease.  More interestingly, it seems likely that as tests start being spread dramatically that the number of confirmed cases is going to skyrocket.  That doesn't necessarily mean it's spreading faster, it just means people who have had the virus already will be identified for the first time.  Most viruses present differently depending on differences between people; it's entirely possible there are people walking around who had what they thought was the flu but was really COVID-19 and shook it off, or went to bed for a few days but never to the doctor.  People who never went to the doctor will never be tested so we'll never know if the virus is less serious than is being reported. 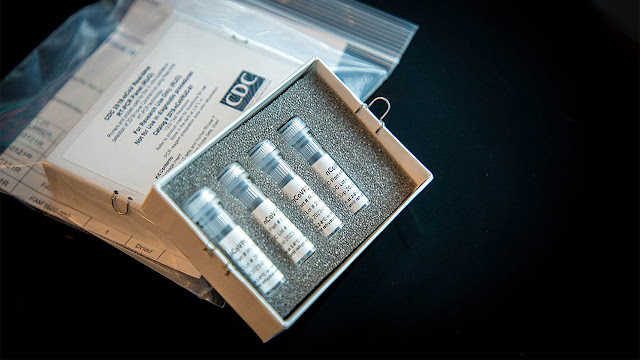