Behind The Virus Shock, The Oil Price War

As I'm sure most of you know, about a month ago as the US started grappling with responses to the Kung Flu, an oil price war broke out at an OPEC meeting in Vienna when Russia and Saudi Arabia turned the world's oil markets into the World's Highest Stakes Game of Chicken.  Since they can't exactly hang a sign at the airports saying, “we will not be undersold!!!” this erupted as nations informed the markets of how much oil they would export per day.  From that linked article at Foreign Policy, dated March 14th:


One week ago, as Saudi Arabia and other big OPEC countries and Russia gathered in Vienna to plan production cuts that could put a floor under falling prices due to the outbreak of coronavirus, crude was trading at more than $50 a barrel. That’s when Moscow decided to blow up a three-year-old pact to manage global oil supplies, refusing to sign on to Saudi Arabia’s proposed cuts, sending the price of oil sharply down.

Riyadh responded not with unilateral cuts of its own but in the opposite direction: It slashed selling prices for its oil and later announced plans to massively increase oil output, further driving down the price of oil that was already plunging due to the disease outbreak and its toll on the global economy. Oil trades today around $33 a barrel.

For Russia and Saudi Arabia, both more or less dependent on oil sales to fund their national budgets, it was—and still is—a dangerous game of chicken. 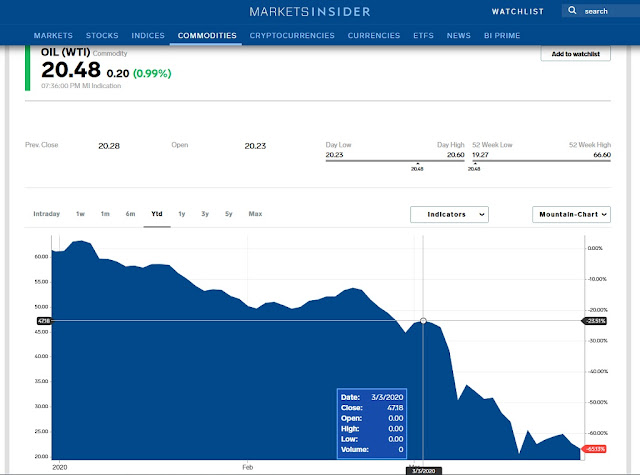 The Oil and Gas Industry news website I link to in the right sidebar has nervous projections of $10/bbl oil.

Like all games of chicken, this is a gamble between Vladimir Putin (who routinely has political opponents disappear on him) and Saudi Crown Prince Mohammed bin Salman (who had a questioning reporter (Jamal Khashoggi) assassinated, his body sliced, diced, and carried out in suitcases) over who flinches and quits first.  It's like two James Bond movie villains in real life.


Russia figured that it could afford to walk away from its informal cooperation with Saudi Arabia and other OPEC countries, even if that meant crashing the price of oil, for a few simple reasons. First, it has tucked lots of money away in the years since the last oil-price crash, giving it a big financial cushion. Second, the biggest losers in any oil-price war, Russia figures, will be high-cost U.S. shale producers; driving the price down would both inflict economic harm on the United States and undermine its ability to wield its favorite tool of international coercion: sanctions.

Ironically, the US shale oil producers are the common enemy of Russia and all of OPEC.  But when suppliers aren't dumping oil at well below their cost, the market self-regulates - which markets are well-known to do.  When OPEC tried to smother it in 2014 and 2015 with a flood of cheap oil, as prices fell, U.S. production fell just enough to get prices up, and then rigs start pumping again.  While the U.S. oil industry may have less cushion now than before, it's open to question whether or not Putin or MBS could ruin it.  It seems like the very worst they could do is drive companies out of production, but as soon as the oil price got back to where Russia and Saudi Arabia could make a profit - if not sooner - the American industry would figure out how to produce at a profit.

Remember the oil geologist who said it was best to consider the Permian Basin (under Texas and New Mexico) as a permanent resource - as close to infinite as we can approximate?

The story at Politico is an interesting read.  Russia claims to have put aside a Wealth Fund full of enough cash to survive oil prices between $25 and $30 a barrel for up to a decade.  But that's still political and while Putin has apparently gotten laws put in to make him President for Life, he's still a politician.


Putin rode the oil boom of the early 2000s to a strong economy and huge popularity—but that’s a harder act to maintain when oil prices plummet. With economic growth a focal point of Putin’s current presidential term—and with his time in office now possibly extending until 2036—big increases in infrastructure investment and social spending are central to his future and key to promises to help turn around long-stagnant living standards.

The Wealth Fund is only so big and he can't spend it forever.  That budget surplus can be gone in flash if he doesn't watch it.

The Saudis think they can make life uncomfortable enough for Putin to outlast him.  They announced more oil exports today, lowering the price farther.


Earlier this month, the Kingdom said it was intent on unleashing growing crude oil volumes on the market, aiming to significantly boost its crude oil exports to a record-breaking more than 10 million bpd in May.

Can they really do 10 million barrels per day?  There are talks about oil facilities drowning in oil due to demand cratering to record lows.  If Saudi Arabia even can produce 10 million bpd (they're never done it before) they may have to pay to store it!  Sort of like negative interest rates for oil.

My local 7-11/Exxon Mobil gas station is selling regular for $1.97/gal - I can't recall the last time I saw gas for less than $2/gal.  As others have said, with forced social isolation, we're seeing record low gas prices and have nowhere to go.  There's plenty of misery in the oil and gas industries, but not all of it is coming from the virus. 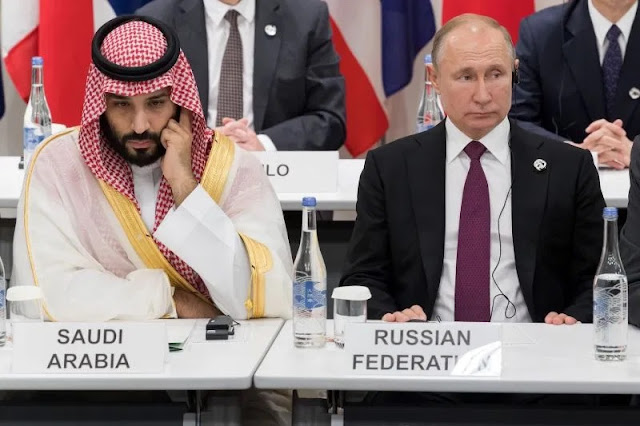