Voyager 2 - Alone in the Night

I've written several pieces about the Voyager program in my decade here, including that I think the exploration of the Solar system by Grand Tour of the Voyager program stands with the greatest achievements of mankind.  It's a one way shot into deep space, of course it's unmanned, but I think it stands with Apollo 11 as a contender for Peak of Western Civilization.

Of course, to slowly glide out of touch with humanity was always the fate of the Voyagers, it just got a lot more real.  There's only one deep space communications dish on Earth that can transmit to Voyager, although others can hear the spacecraft, the Canberra Australia station with its 70 meter (230 feet) diameter dish.  Earlier this month, NASA announced that the station needs to be shut down for repair, refurbishment and enhancement.  The station will be shut down for 11 months.


For approximately 11 months – until the end of January 2021, when the repairs are expected to be complete – Voyager 2 will be totally alone, coasting into the unknown in a quiescent mode of operation designed to conserve power and keep the probe on course until DSS–43 comes back online.

"We put the spacecraft back into a state where it will be just fine, assuming that everything goes normally with it during the time that the antenna is down," explains Voyager project manager Suzanne Dodd from NASA's Jet Propulsion Laboratory.

"If things don't go normally – which is always a possibility, especially with an ageing spacecraft – then the onboard fault protection that's there can handle the situation."

Some of you probably heard that Voyager 2 experienced "an anomaly" which triggered her autonomous fault protection routines and took the spacecraft out of expected communications.


The malfunction meant the spacecraft failed to perform a scheduled flight manoeuvre on January 25. Painstaking assessments from NASA engineers on Earth ultimately fixed the issue, with controllers having to wait 34 hours for each single response from Voyager 2, given the 17-hour transmission time for signals to travel to and from the distant probe.

Rectifying the problem involved turning five key scientific instruments off and turning them back on again – something that reportedly had never been done before – but luckily the reboot worked a charm.

The universal software fix: they turned it off and back on again.  It just took over 34 hours with the 17 light hours to the probe.

For perspective, the Canberra 70 meter dish has been operational for 50 years.  Taking the station out of service for repairs is like taking the car you drive everyday, a 1970 car, into the shop for upgrades.  It's never a great time, but it's better to do it by planning: on your time rather than having it break down in service and leave you with no alternatives.

Reality is that the Voyagers are in their 40th years of a 5 year mission.  Their Radioisotope Thermal Generators (RTGs) are expected to keep the few instruments that can run alive until 2025, but that could change with the random failure of any one of thousands of components.  Either way, eventually the RTGs will no long be able to power enough of the instruments to get data to send back.  Eventually, first one Voyager then the sister spacecraft will go silent.  More eventually, they'll cool to almost absolute zero.

If we're lucky, some day a ship from Earth may find her and bring her back to whatever serves as the equivalent of the Smithsonian in those days.

In all probability, she will simply follow the Newtonian laws of motion, cool to a couple of degrees Kelvin and glide away forever, all alone in the night. 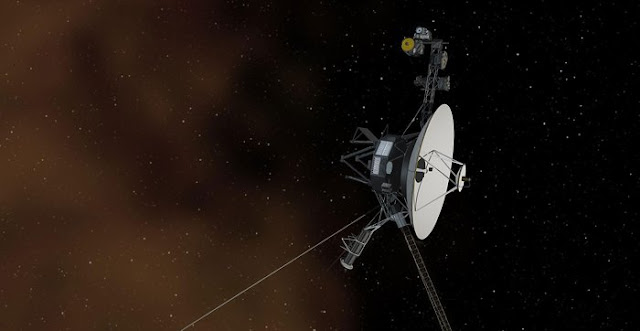