Firefly isn't a new space startup, but a rocket company that hasn't launched their booster has to be called a startup in my book.  The company was started in 2014 by former NASA plasma physicist Tom Markusic, who had been assigned by the agency to monitor the work on Kwajalein of a startup called SpaceX.  That assignment was in early 2006.  The first SpaceX launch, in March of '06, had failed, but by that summer, he had left NASA to join SpaceX and wound up directing the central Texas site where SpaceX tested its Merlin rocket engines.  Between SpaceX and his own Firefly, Markusic had also worked for Blue Origin and Virgin Galactic.

Firefly hit hard times in 2016 and was almost shuttered.  Markusic found an angel investor from the Ukraine, Max Polyakov, and the two of them pulled the company forward with a skeleton crew by force of will.  2019 articles hint that could be the year they get into space, but it still hasn't happened.

Now they're focused on a launch this summer and a plan to sell a service to deliver payloads to the surface of the moon.  Markusic believes that the key to success as a business is not so much as being the competitive small launcher business but being in the more profitable sectors.


Launch, he said, is only worth about $10 billion of the overall space industry valued at $350 billion. Having plans beyond launch helps with Markusic's pitch to investors when explaining how Firefly's business can scale. "Building a launch vehicle gives you the keys to space," Markusic said. "But if you want to tap into the full revenue potential of space, you have to have a spacecraft as well."

So Firefly has designed its spacecraft, and this week the company confirmed it has submitted a bid for the CLPS program's fourth task order, 19C, to deliver scientific instruments to one of the lunar poles. The deadline for bids was early March, and NASA is expected to award contracts some time in April. That would leave about 2.5 years for companies to deliver on a lunar mission to be launched in the latter half of 2022.

CLPS?  NASA's Commercial Lunar Services Program (or CLPS, which rhymes with chips) has put $2.8 billion on the table for delivery services.  Over the next decade, a pool of more than a dozen companies is eligible to bid for contracts to deliver scientific instruments to the surface of the Moon. As an added benefit, NASA is helping to stimulate a cislunar economy.

Firefly is working on development of its Orbital Transfer Vehicle (OTV) and a lander called Genesis to deliver customer payloads to the surface of the moon.  That seems like quite a lot for a (roughly) 300-man company, so Firefly is buying technologies and building their designs around them.


To power its OTV vehicle, Firefly has partnered with Aerojet Rocketdyne, an industry leader in in-space propulsion. The vehicle will use Aerojet's XR-5 Hall Thrusters, which have already been tested in space on the Air Force's uncrewed X-37 space plane.
...
For the Genesis lander, Firefly will license technology developed for SpaceIL's Beresheet lander. True, this vehicle crashed into the Moon in April 2019, but it nonetheless met a number of mission milestones. "This gives us the highest level of technology readiness in its class for our lunar lander," Markusic said.

Firefly will build the lander with US components to make it eligible for NASA and other government contracts. Firefly will also change the propulsion system to use Aerojet thrusters to make for a more powerful, capable lander. Genesis will be able to carry 85kg of cargo to the Moon's surface.

In the space program of the '60s, when a mission was launched to the moon, it went to the moon Right Freakin' NOW, by God!  Flight times were on the order of three days.  There are ways to get there that are cheaper but take more time - this is what Firefly's mission looks like.

The Genesis lander and OTV are put into a highly elliptical orbit on launch day (Day Zero here).  For the next month and a half, the Aerojet Hall Thrusters slowly add energy at the right part of the orbit to get the spacecraft high enough to be captured by the moon's gravity and go into lunar orbit.  The customer's payload lands on the moon's surface 2 months after launch. 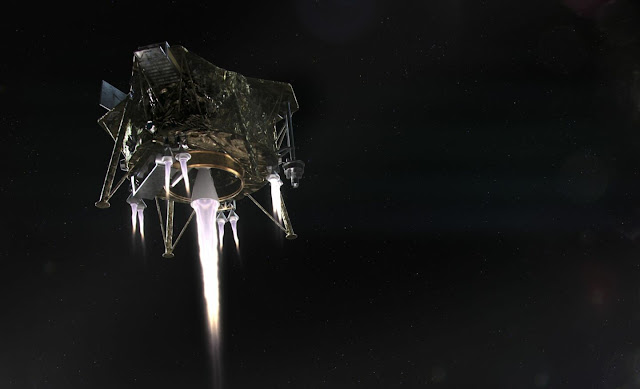 Firefly's Genesis lander has 10 different slots for customer payloads in three different "footprints" on the lander.  Five of one, four of a second and one of the third.

Can they make a launch by this summer?  The latest problem Firefly is facing is the same as everyone else: the COVID-19 virus interruptions.  They're getting engineers to work from home as much as possible, separating shifts so that there's no overlap and fewer people are in the buildings at once.  The biggest problem is getting everything to work, and that's the fundamental problem of the launch business.  It will be the first test of a lot complicated hardware and software.

Will they make it?   I don't know, but it will be interesting to watch.