Looking to be a Busy Week - 10 Days at Boca Chica, Texas

NASA Spaceflight and Teslarati, are reporting that Starship Serial Number 3 prototype has been moved from their Vehicle Assembly Building (VAB) to the pad where it can be tested and launched for short hops, like its predecessor, the Starhopper.  The surprise is that SN3 already has its landing legs.

Four of the six landing legs are circled in this shot by @bocachicagal.

This is looking to be a very busy week at SpaceX's Boca Chica facility.


In fact, SpaceX filed a Notice to Airmen (NOTAM) with the Federal Aviation Administration (FAA) on March 30th — the biggest confirmation yet that the company is seriously working to prepare Starship SN3 for a Raptor engine static fire test as early as April 1st. Backup dates on the 2nd, 3rd, and 4th are included, leaving a decent amount of breathing room for SpaceX’s Texas team to (hopefully) successfully complete the rocket’s proof test in the next few days.

In all probability, before they bolt an expensive raptor engine onto SN3, they're going to test the prototype in a couple of different ways.  First, they'll fill the tanks with water and pressurize it to test for leaks and verify general structural integrity.  After that, the team will recreate the pressure test that blew up SN1 (and the redesigned SN2 passed).


... Starship SN3’s proof test will see the rocket’s methane and oxygen tanks fully filled with cryogenic liquid nitrogen. The tank pressure would then be increased to around 6-8 bar (90-115 psi) to ensure that Starship can handle the thermal and pressure stresses it will experience during launches.

While they are pretty sure they understand the reasons why SN1 blew up, evidenced by SN2 surviving the same test, prudence says to walk before you run and make sure all of these things work every step of the way.  Success is by no means guaranteed. The dates in the NOTAM filing indicate a possibility they can complete these tests and be ready for static firing before the end of this week.

After these tests, the next tests will be to install and begin static testing of the Raptor engine.  This could conceivably happen by the end of the week.


A static fire test of the engine on SN3 was originally expected no sooner than April 1, but the beach closures which indicated this schedule were cancelled early Tuesday. Closures originally associated with a 150 meter hop test are still scheduled from 9:00 AM to 11:59 PM local time (14:00 to 04:59 UTC) daily from April 6 to April 8. It is possible the static fire test could occur during these closures instead, or that new closures will be scheduled.

The static fire and hop test timeline depends on successful cryogenic testing, engine installation, and fueling tests. The successful Starhopper campaign utilized a similar approach to that expected for SN3. The vehicle will be fueled for a potential static fire, and SpaceX teams will monitor the vehicle’s systems. If the fueling tests are successful, the teams can then continue into a static fire test. If any issues arise during fueling, the teams can take corrective action before another fueling attempt.

April 6th through 8th is next Monday through Wednesday, of course.  Those dates are flexible. 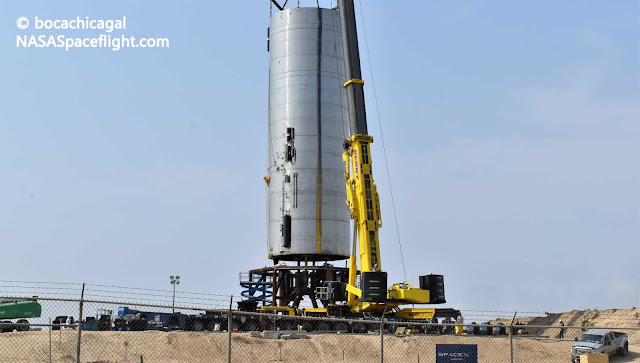 SN03 being lowered onto the test stand.

There's a small chance one of you lives close enough to Boca Chica to see this; for the rest of us, NASA Spaceflight keeps a pretty steady stream of videos of SpaceX operations on their YouTube Channel.