Thanks to Evaluation Engineering magazine's website for today's important article on the America's Strategic Vacuum Reserve or SVR.

According to the article, World War II marked the beginning of a recognition for the need to have an SVR.  The enormous jump in the requirement for vacuum in vacuum tubes of all sizes and shapes then led to the post war boom in which vacuum was needed for TV displays (Cathode Ray Tubes or CRTs), test equipment and more of the electronics age, before solid state electronics drastically lowered the need for vacuum.

Most people believe we produce our own vacuums as needed, but vacuums are mined like many other precious commodities.  Before WWII, most vacuum was a byproduct of Helium mining.


Recent events in the Middle East and the United States have called attention to rapid increases in the consumption of even low-grade vacuum, mostly for political and theological applications. Researchers in the Pentagon and civilian think-tanks have awakened to the distinct possibility that obtaining decent vacuum of *any* grade may become difficult or impossible.

Noting stiff competition and higher consumption of vacuum by Chinese industries and military, the United States Vacuum Association, a trade association dedicated to restoring the previously-secure vacuum supply chain, has called upon the U.S. government to establish strategic reserves of high- and medium-quality vacuum.

While wartime vacuum repositories relied on sealed underground caverns left over from helium mining, intensive efforts are under way to render commercial and civic structures vacuum-tight to serve as interim storage facilities. Long-range strategic planning calls for multiple dispersed vacuum repositories to be located in or near areas of high demand and adjacent to current vacuum refineries.

I can just hear some of you saying, “but SiG; we're surrounded by vacuum?  The International Space Station lives in a vacuum.  Why don't we mine that vacuum when we need some?”  Fair question.  The article touches on that; I can only say it's not as easy as it sounds.


Although unmentioned in news accounts, researchers aboard the International Space Station (ISS) are experimenting with techniques that allow compression and liquefaction of near-Earth medium-grade vacuum for shipment to Earth via returning Soyuz capsules. Speculative projections indicate that a space vehicle shuttling passengers and supplies from Earth orbit to Mars could acquire and process large enough quantities of diamond-hard deep-space vacuum on the trip's return leg to significantly offset costs of the round trip.


As a vacuum user, your support for creation of the new Strategic Vacuum Reserve and upgrading of the few remaining World War II-era repositories is critical to the program's success. You can help by contacting your Congressional and Senate representatives and calling their attention to this issue.

Remember... a good vacuum is a terrible thing to lose. Write your Congressman TODAY!

(This announcement is cosponsored by the American Vacuum Tube Institute and the U.S. Council on Consumer Vacuum Products) 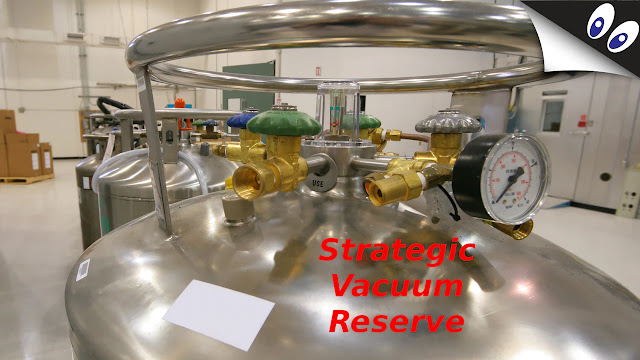 Industrial vacuum storage container; you can notice the pressure gauge at right indicates a pressure of 0.0.