Late last night through early this morning, SpaceX Starship prototype Serial Number 4  achieved something the first three serial numbers never did.  It survived a fueling test with liquid nitrogen (in place of methane).


Late on Sunday night, SpaceX completed a critical cryogenic test of a Starship prototype at its launch site in South Texas. The successful test, during which chilled nitrogen was loaded into pressurized fuel tanks, was reported on Twitter by SpaceX founder Elon Musk.

The vehicle, dubbed SN4—which stands for Serial Number 4—was pressurized to 4.9 bar, or 4.9 times the atmospheric pressure at the surface of the Earth. This pressure is not as high as Starship's fuel tanks and plumbing system are designed to withstand, but it is enough for a basic flight.

The test of SN3 failed back on the night of April 3rd, which was explained to have been due to a testing error, specifically loading the liquid nitrogen by volume not weight, if I understood them.  As with SN3, the plan was to run these cryogenic tests, and then strap one of their Raptor engines to the protoype for a static test.  That could happen by this weekend.  Once the static tests pass, there will be a test flight of the vehicle.  No, seriously.


Should the static fire test be successful, Musk has said the SN4 vehicle will make a 150-meter "hop" test, much as the "Starhopper" prototype performed in August 2019. The company has yet to receive regulatory approval for this test, so it may not happen for several weeks.

Serial Number 5, well into construction already, has been earmarked for a higher altitude test flight. Musk has said, if all goes well with SN4, the plan is to attach three Raptors to SN5 for a higher flight test later this spring.  How much spring is left?  Seven weeks?

It helps to remember that Starship is just the upper stage for something much, much bigger:  Starship Super Heavy shown here between the Saturn V and a Falcon 9, the Starship Super Heavy's ancestor.  The vehicle was originally named the BFR, which was cleaned up for public consumption by explaining it as Big Falcon Rocket.  Although the corporate website refers to the rocket as Starship and Super Heavy, they also call it the BFR. 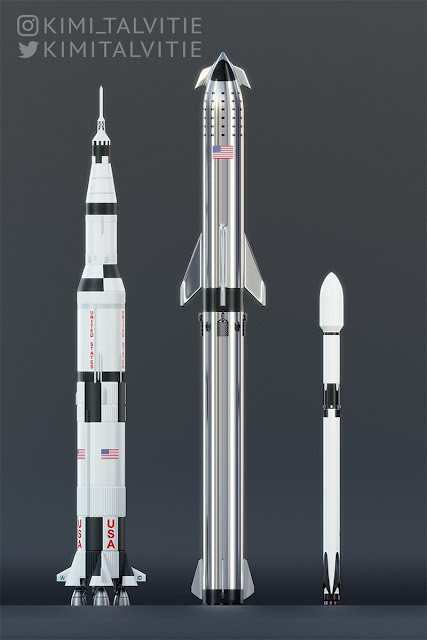 Starship is the "upper stage" of a two-part, fully reusable launch system that SpaceX is developing. The company's goal is for the "Super Heavy" rocket to boost Starship into orbit, where this vehicle can either carry cargo to some destination or carry dozens of passengers.

I read somewhere recently that Starship is considered much harder to get right than the Super Heavy booster, so that's why all the prototyping to date has been for the upper stage.  I guess SpaceX regards something with liftoff capability along the lines of a Saturn V, but fully reusable instead of three disposable stages, as their expertise or knowledge base, something they have a pretty good idea of how to do.  I expect their development will continue being fun to watch.