So a couple of small news items.

NASA administrator Jim Bridenstine says he's “fairly confident” that astronauts Doug Hurley and Bob Behnken will fly SpaceX Crew Dragon's Demo-2 mission by late May.  With a begrudging admission that it might slip into June, but probably not by much.  It was announced in March that approval for the manned mission partially depended on a resolution of why booster B1048 had an engine failure with seconds to go in its burn to place 60 Starlink satellites in orbit earlier in the month.


[Bridenstine] also stated that SpaceX’s March 18th in-flight engine failure was “not going to impact our commercial crew launch,” confirming that SpaceX already has “a really good understanding of” what went wrong. Most likely, this means that Falcon 9 B1048’s stumble was directly related to the fact that the booster was flying for the fifth time – a first for a SpaceX rocket and orbital-class rocket boosters in general. Crew Dragon Demo-2 will be Falcon 9 booster B1058’s first launch.

There are a couple of parachute tests aimed at “corner cases” - infrequent and improbable combinations of circumstances the system may be exposed to - which will be flown soon.  The last test, scheduled around the end of March, was aborted under peculiar circumstances.


During SpaceX’s most recent parachute test last month, the test rig was dropped from a helicopter prematurely after the craft became unstable over a test site in Nevada. NASA officials said the parachutes were not to blame for the botched test, and the helicopter pilot decided to release the test rig for safety reasons.

“It got unstable,” Bridenstine said. “The pilot dropped the test article, which was basically just a weight simulator. Nothing from that was recoverable, including the parachutes that were on-board. So we’ve got two more parachute tests, and now they’re going to be done out of the C-130 (cargo plane) instead of from a helicopter. We’ve got agreement from the chief engineer and the program manager, and the astronaut office, that those two parachute tests that we have remaining are good to go out of the C-130.”

You probably heard that the Russians just launched a crew of three to the International Space Station back on the 8th.  NASA’s current contract with the Russian space agency to purchase Soyuz seats for U.S. astronauts expires this year.  The commercial crew contracts were awarded to Boeing and SpaceX in 2014 (this was in yesterday's column) but since both are behind the original schedule, it leaves the ISS with a crew of three instead of six until May's test flight.  Hurley and Behnken were originally scheduled for a short visit to ISS but will join the crew for an extended time.


With the COVID-19 delay “until further notice” of the Argentinian satellite SpaceX was to have launched on March 30th, they've been shuffling around and have scheduled the next mission to launch 60 Starlink satellites.  Originally set for NET Thursday 4/16 it has now slipped into next week, tentatively Wednesday the 22nd; that's right: Erf day.   This will be the third flight of booster B1051. 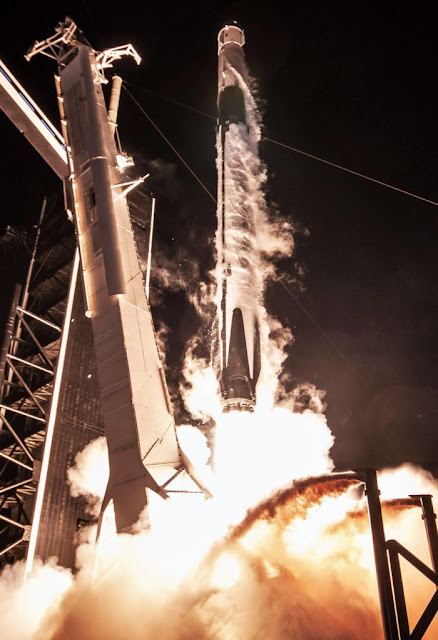 Booster 1051's first mission was to launch the first Crew Dragon test flight last March, which sort of ties these two stories together.