30 Years of the Hubble Space Telescope

The Hubble Space Telescope, often just called the HST, was deployed 30 years ago today: April 25, 1990.  HST was launched the day before onboard shuttle Discovery, but wasn't fully checked out and declared operational until May 20.  For those of us who routinely criticize the Space Launch System for being behind schedule and over budget, there's this gem to consider (also from Wikipedia):


From its original total cost estimate of about US$400 million, the telescope cost about US$4.7 billion by the time of its launch. Hubble's cumulative costs were estimated to be about US$10 billion in 2010, twenty years after launch.[58]

Gee, just short of 12x the original cost estimate.  NASA has a webpage dedicated to the telescope filled with all sorts of eye-popping pictures.

Probably the thing that the HST is best known for is having a defective primary mirror.  HST's optical design is a type of a Cassegrain reflector called a Ritchey-Chrétien.  RCs have become the preferred optical configuration in high end research observatories because they provide a wide photographic field with less optical distortion off axis than others.  There are three or four types of optical Cassegrain reflectors, which have a concave primary (big) mirror and a convex secondary mirror that typically is around 25% to 30% of the diameter of the primary.  In the RC, both mirrors are hyperbolic (a hyperboloid of revolution).

Convex mirrors of all sorts are more difficult to test than concave mirrors, and require another calibrated mirror to test against.  It has become common practice in testing optical systems to develop a test system with its own optical surfaces that need to be certified correct and use that to test the system being built.  According to a report in New Scientist in 1990, the issue with the HST was because the test system was built incorrectly and yet certified.


NASA has established how a mirror aboard its $1.5 billion Hubble Telescope came to be the wrong shape. The agency said last week that errors in a test instrument apparently led Perkin-Elmer, which fabricated the optics, to finish the 2.4-metre primary mirror of the Hubble Space Telescope incorrectly. Tests by NASA earlier this month showed that a lens in the test instrument, called the ‘reflective null corrector’, is about a millimetre askew. Preliminary analysis indicates that an error of this magnitude could cause the spherical aberration that prevents Hubble from focusing sharply. 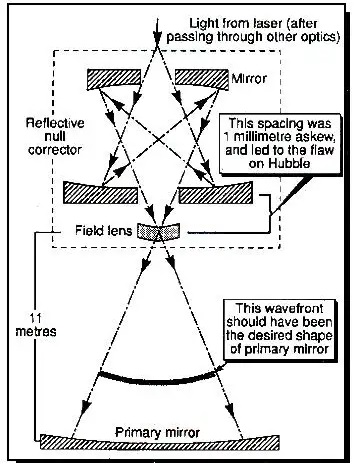 For reference, 1mm is just over .039 inch.  That's more than 1/32" and thousands of woodworkers could make the fixture to that accuracy.  The surface is being judged compared to wavelengths of light, around 20 millionths of an inch.   Because of this error, Hubble's primary was made flawlessly to the wrong prescription.  It has been said that an amateur with a light bulb and a straight edge - a Foucault tester - could have told them their mirror was wrong.  And that amateur would have been ignored because their instrument wasn't certified.

I've mentioned a couple of times that I've made a few telescope mirrors grinding glass and then building the instruments.  I've done a lot of Foucault tests.  I think I could have told them their mirror was wrong.

Hubble's optical system was corrected by adding more optics; a package called COSTAR, The Corrective Optics Space Telescope Axial Replacement.  You can be sure it would have produced better images without the additional optics of COSTAR but they made the best of a bad situation.