Slapping Back at the Eduocracy

Kevin at the Smallest Minority had a post yesterday centered on an article in Harvard magazine attacking homeschooling parents and the very concept of allowing parents to run their children's education.

The Foundation for Economic Education frequently posts articles on homeschooling, often by Kerry McDonald.  Mrs. McDonald specializes in this area.  To quote a portion of her biography from FEE:


Kerry McDonald is a Senior Education Fellow at FEE  ... She is also an adjunct scholar at The Cato Institute and a regular Forbes contributor. Kerry has a B.A. in economics from Bowdoin College and an M.Ed. in education policy from Harvard University.

Kerry went after this article in a letter to the magazine, reprinted in full at FEE.  It seems at least possible that an alumnus with a Masters from Harvard might be taken seriously at the magazine.  It's worth a read if you care about the right to educate without going through the school's indoctrination factories.  As usual I'll post some clips from the article.  It's probably worthwhile to start her response with the illustration for Harvard magazine because it's the introduction readers got to the original article. 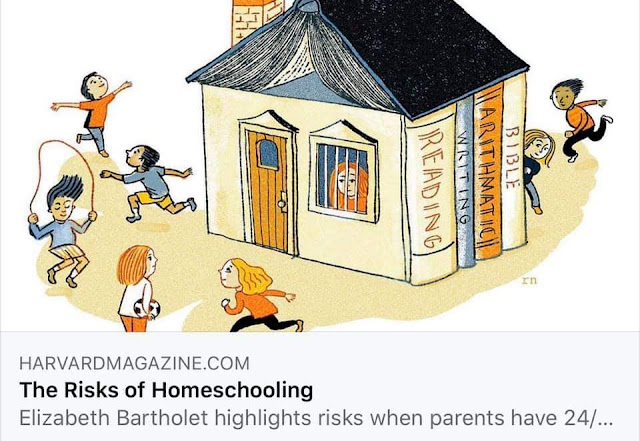 The illustration not so subtly attacks the idea that home schools may be supported by the Bible.  As Kevin notes, it also not so subtly hints that the (likely) public-school-educated artist apparently doesn't know how to spell “Arithmetic.”


I agree with the author of the article and Harvard Law School professor, Elizabeth Bartholet, who is widely quoted throughout, that it is critically important that children be protected from abuse. They argue that sending children to school prompts “mandated reporters,” such as teachers and school administrators, to identify possible child abuse. But many parents choose to homeschool their children to remove them from abuse at school, whether it’s widespread bullying by peers or, tragically, rampant abuse by teachers and school administrators themselves.
...
One of the more incorrect assertions in the article is the statement that up to 90 percent of today’s homeschooling families are “driven by conservative Christian beliefs.”

... About two-thirds of today’s nearly two million US homeschoolers identify as Christian (equal to the US population as a whole), but the homeschooling population is becoming increasingly diverse, both ideologically and demographically.
....
Much of the current growth in homeschooling is being driven by urban, secular parents who are disillusioned with a test-driven, one-size-fits-all mass schooling model and want a more individualized educational environment for their children.
....
Indeed, research on homeschoolers finds that they are tightly connected with their larger community and may have more community involvement and participation in extracurricular and volunteer activities than schooled children due to their more flexible schedules and interaction with a wide assortment of community members. This reinforces similar research on private education more broadly, suggesting positive civic engagement and outcomes.
....
While there may always be outliers and more research is needed, most peer-reviewed studies on homeschooling outcomes find that homeschoolers generally outperform their schooled peers academically, and have positive life experiences.

Those last two clips may well be the root cause of this attack by the Education Establishment against homeschooling; they're being beaten at their specialty by parents who don't have Ph.D.s in education.  The establishment is being shown to be bad at what they do and to be going about it all wrong.

In my 10 years and over 3500 posts here, I know I've posted many times that regardless of what we spend on education at the Federal level, it has no effect on education outcomes, meaning those tests that supposedly drive everything.  (One example from early in the blog history.)