Last Saturday, we talked about my Webster internal combustion engine and the issues I had with the piston and rings.  Thanks to comments from and conversation with both Raven and Ritchie, I realized I had a defective mental picture of how piston rings function.  Based on that, I enlarged the piston ring grooves a few thousandths in both directions.  The grooves were made deeper, so that the test ring pieces (from the two I broke getting out of the piston) moved around easily in the grooves and if I pressed the ring down into the groove, I could feel the step up onto the piston with a fingernail. 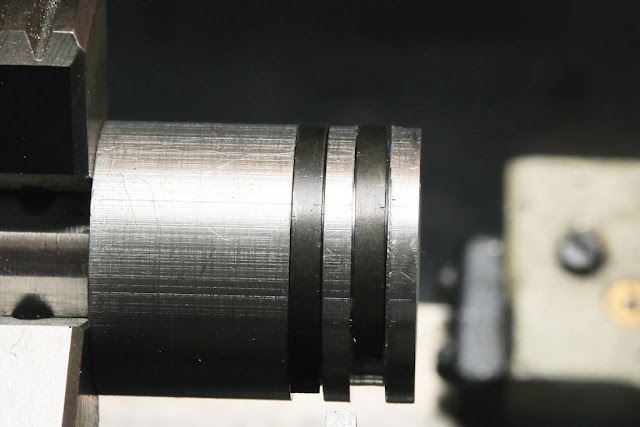 The piston has a handle, a half-inch diameter, couple of inch long piece barely visible on the left in this picture, held between the chuck jaws.  That's not part of the piston design, it was just there to make it easy to work on.  Now that I was willing to accept the piston, it was time to turn the piston around, part off the handle and start to work on the back side, which has a few features.  While it was turned around, I took out a bit of metal with a drill bit and then the biggest end mill I can put in the lathe's tailstock.

Next, I needed to make a fixture to hold the piston tight in my vise without marring it. I took a piece of scrap aluminum and made a hole in it that's about .003 bigger than the piston, then slit the whole fixture in half lengthwise so that the two halves would be perpendicular to the vise jaws and clamp onto the piston. I had the piston wrapped with a piece of soda can, also aluminum about .004 thick.  When I squeeze this just by hand strength, it doesn't want to close. In the vise, it works as intended. 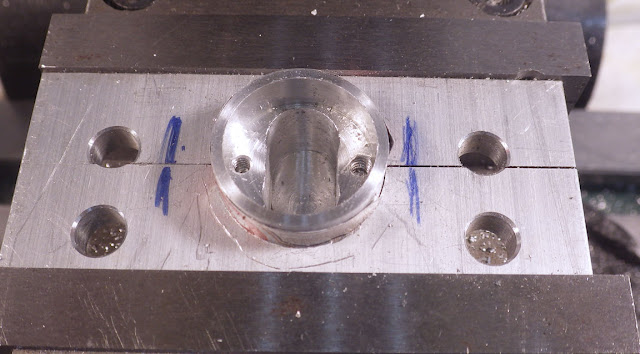 This is the back of the piston with a groove for the piston's connecting rod to rotate and work.  There's a pair of 4-40 holes on either side that hold a pin that the connecting rod moves on - called the wrist pin (Wikipedia tells me the real name is a Gudgeon pin).

The piston is now close to being finished with its machining with the exception that it needs two holes drilled through it.  If you take the horizontal axis, where the fixture is split, as one axis, a hole gets drilled fully across the piston a little forward of where the piston is held in this fixture parallel to the top of the fixture.  That hole is 3/16" or 0.188 diameter, and has to be precisely sized (a reamed hole, not just drilled).  Perpendicular to that hole, along an axis from the top of the frame to bottom, is a smaller hole, 3/32" or 0.094, for a small oiling tube.  That hole is on only one side of the piston.

I've thought about this and don't have a real feel for how accurate those angles have to be.  I know that for any deviation from perfection in the wrist pin's holes the piston will rotate in the bore a small amount as it goes back and forth in the cylinder. That wobble would add to losses or inefficiency in the engine.  Some playing around in 3D CAD gives a fixture that could be made from a scrap of 1/2" thick aluminum bar.  The section that plugs into the slot in the piston is obvious.  Those surfaces on the rectangular section become reference surfaces that I can count on to align the piston for drilling in the right places. 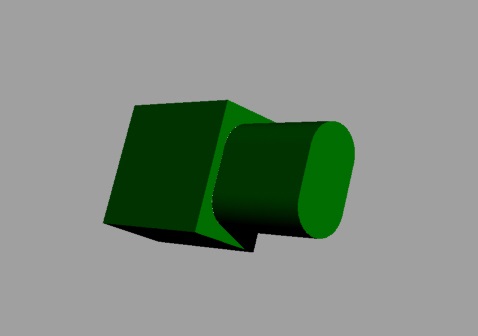 On the other hand, it might be acceptable to just eyeball the alignment and the position of the pin with respect to that slot will be fixed by the setscrews anyway.