If WiFi scares you, forget 5G cellular that's still years away, a new generation of WiFi is coming and will be here years sooner than 5G.  According to the Microwaves & RF trade magazine daily email news:


The Federal Communications Commission (FCC) has adopted rules that make 1200 MHz of spectrum in the 6-GHz band (5.925–7.125 GHz) available for unlicensed use. These new rules will usher in Wi-Fi 6, the next generation of Wi-Fi, and play a major role in the growth of the Internet of Things. Wi-Fi 6 will be over 2.5X faster than the current standard and deliver improved performance. Opening the 6-GHz band for unlicensed use will also increase the amount of spectrum available for Wi-Fi by nearly a factor of five and help improve rural connectivity.

Current WiFi activity, WiFi 5, as most of you know, is located in two frequency bands separated by a factor of (a bit over) 2.  The first, and still most widely used band is at 2.4 GHz, stretching from 2.4 to 2.5 GHz - 100 MHz of allocated channels.  The problem with that band has been that it's very busy with Bluetooth, wireless toll collection and a bunch of other services so data rates can be affected.  The newer and higher frequency band is 5.18 to 5.825 GHz, or almost 810 MHz of allocated channels and over eight times the currently available bandwidth as 2.4 GHz WiFi.  The higher frequency band has much more spectrum than the lower (and first) WiFi band, and can have higher data rate channels, too.

The new allocations from the FCC will extend the 5 GHz band up 7.125 GHz.  Instead of 810 MHz, there will be over 2000 MHz of spectrum, almost 2-1/2 times as much spectrum, allowing higher data rates and relieving the congestion of too many signals in the band.  Since this was only authorized by the FCC this week, I'd expect new WiFi routers that go to 7.125 GHz to start hitting the market by the fall. There's already WiFi 6 out there, but why not wait until you get the wider bandwidth?

The transitions to Working From Home (WFH) brought on by the Kung Flu lock downs have increased WiFi usage and put pressure on the nation's systems.


The trend toward WFH means an explosion in the need for wireless connectivity, and that means even more reliance on Wi-Fi than ever. According to high-end Wi-Fi provider Plume Design, some 22.6 million people were active online during the workday prior to the coronavirus crisis. Now, about 46.2 million users are flooding the data pipelines.

Many of our devices and routers support the prevalent Wi-Fi 5 standard (a.k.a. “the standard formerly known as 802.11ac” now that the Wi-Fi Alliance has shifted to simply numbering the standards rather than using their unwieldy IEEE monikers; I, for one, applaud the move). But what if Wi-Fi 5’s 3.5-Gb/s maximum data rate, 256-QAM limit on subcarrier modulation, and four spatial streams can’t cut the mustard?

The Wi-Fi standard has already evolved beyond Wi-Fi 5. Wi-Fi 6 is with us and promises to alleviate the growing connectivity logjam. It offers numerous improvements over its processor: With eight spatial streams and 1024-QAM subcarrier modulation, Wi-Fi 6 now sports a maximum data rate of 9.6 Gb/s.

Personally, I think this is a wonderful development and more high speed connectivity is a Good Thing.  There are existing users of that spectrum that's being allocated to WiFi (as there almost always are) but the articles make it sound like the FCC is managing the systems to minimize conflict.

I'm only being slightly facetious about being afraid of WiFi, I know some people are.  Personally, I'd rather have everything in my house wired for gigabit Ethernet but that's for security, not concern over RF.  Chances are that people afraid of WiFi won't be affected by this because they won't have a WiFi router in their house of any kind! 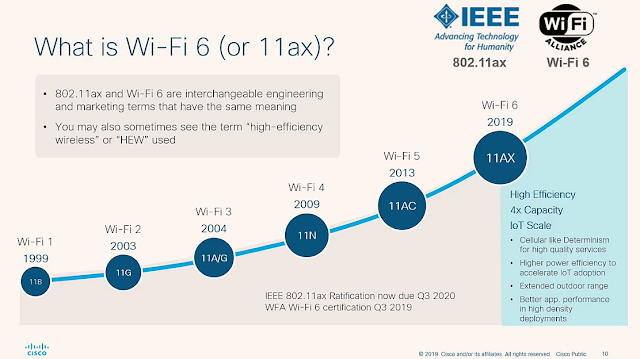