It's been a couple of weeks since I updated progress on my Webster internal combustion engine, because I had a side project that ended up taking time away from it.

I'm working on the piston connecting rod.  Needlessly fancy, but guys who make things like this engine like to do needlessly fancy parts (as a rash generalization) so I'm going to try to capture the details.  This is the Conn Rod: 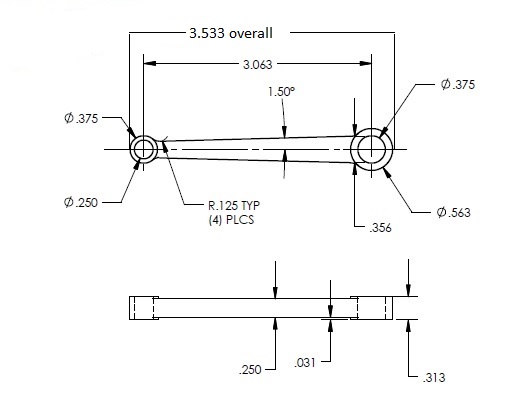 It could be the same thickness for the entire part, but the guy takes 5/16 thick stock and thins it out by 1/32" on both sides.  Plus, he leaves the round shape of the portion that holds the bearings.  Both of the circular openings on both ends get some bearing bronze inserts.  I had to buy a foot of bearing bronze to cut two pieces that are 5/16" long.  It's a lifetime supply.  Anybody that makes anything, from woodworking to electronics projects to robots to mechanical projects knows the hassles of minimum order quantities.

My process to make this isn't going to be the way guys do it on a manual mill.  That would entail several setups (I think I see six setups but there might be an easier way).  I'm going to cut the outline under CNC control.  I've put temporary holes for 10-32 screws where the .250 and .375 holes will eventually be and I've screwed a piece of 5/16" stock to a tooling plate to cut out the ends.  I hope to get by with two setups: one for cutting the shape which I'll also use for that 1/32" relief cut, and then flip it over to do the relief cut on the other side.  Finally, I'll drill those holes for the bearings.

To get the CAM program to work on this, I needed to turn the 2D/DXF drawing that I had into a 3D model and save that as an .STL file (stereolithography - the file format most 3D printers use). 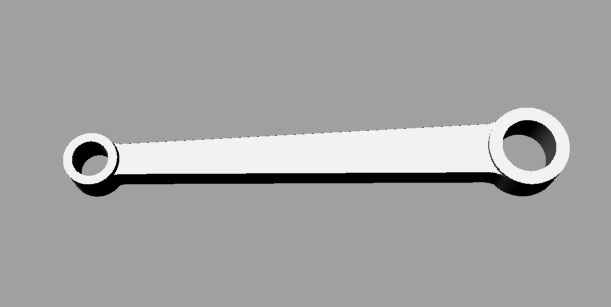 It took a lot of time to get the tool paths that I want, to cut the outline of the part.  It seems that there was a default setting of the CAM program I use (DeskProto - an old version) that I hadn't gotten set when I installed it on this computer back in December.  It made every X and Y coordinate on the part positive, while I set up my fixture to put (0,0) on the mid-line and on the very left edge of the small bearing holder.  I could change the coordinates of my reference point on the mill's table, but changed the coordinates of the part to just use the drawing.

A simulation of all of the tool paths looks like this: 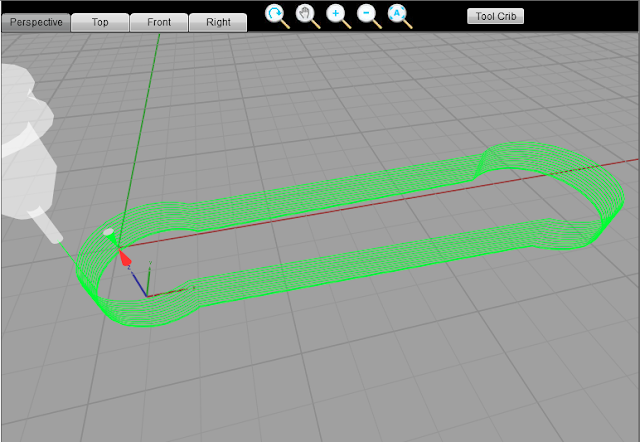 It looks different - fatter than the rod itself - because the green lines are offset from the part by 1/4" - the radius of the 1/2" bit I'm going to cut this with.

I had hoped to have this cut today, but then ran into the problem of, "why aren't the coordinates what I told it they should be?"  Once this is cut, it's still going to be the full 5/16" thick and the Conn Rod's thickness won't be relieved around the bearings and in between the ends.  That's going to be another adventure in making tool paths with the CAM program.