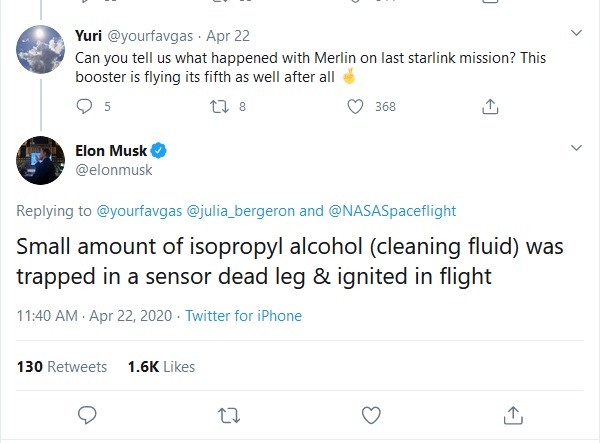 When another Twitter user asked what a "dead leg" is, a third user, David Urry, posted this diagram to explain it, after saying:


My best guess on what the heck Elon's talking about: 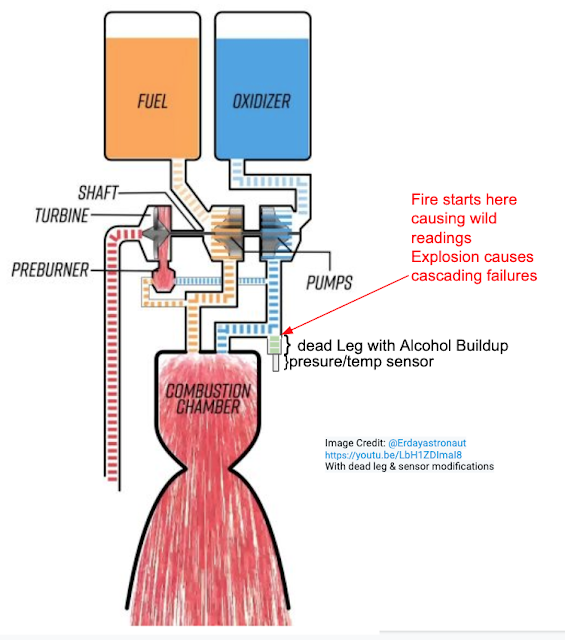 According to this week's Rocket Report on Ars Technica:


A source told Ars that the company has already replicated the problem during tests, and that fixing it will require changing some cleaning procedures. This should have no effect on the upcoming Crew Dragon launch.

If you haven't heard the results, Wednesday's Starlink mission was a very successful mission for SpaceX.  First off, all of the Starlink satellites were delivered to orbit as planned.  Next, the booster nailed its landing on the drone ship Of Course I Still Love You.  Third, both fairing halves were recovered; one caught in the net and the other retrieved from the ocean.  These were already re-used fairing halves, opening the possibility of a third flight for the fairings, which will be a first.  Finally, the mission put the Falcon 9 booster ahead of the Atlas V as the most experienced rocket in the US.
The Falcon 9 rocket has now launched 84 times. This surpasses the total flights by United Launch Alliance's Atlas V rocket.


The Atlas V rocket first launched on August 2, 2002—about three months after SpaceX was founded by Elon Musk and two other engineers, Tom Mueller and Chris Thompson. Since then, the Atlas V rocket has flown an average of a little fewer than five missions per year. All were rated as successes.

SpaceX first flew the Falcon 9 rocket on June 4, 2010, from Space Launch Complex 40 in Florida. It has caught up to the Atlas V rocket by flying an increasing cadence of missions from 2017 onward, averaging 17 flights a year over the last three full years. One of SpaceX's launches, CRS-7 in 2015, failed.
...
Perhaps more impressively, the Falcon 9 has assumed the mantle of most-experienced rocket while making multiple revisions to its design and incorporating first-stage reuse. In short, SpaceX increased the flight rate of its rocket even as it has aggressively sought to optimize its performance. The company that was once an upstart now stands among—if not above—the blue bloods of the US launch industry.

It's hard to find fault with that last statement from Eric Berger at ARS.


While talking about SpaceX, I should note that serial number 4 of the Starship prototypes was rolled to the test stand at Boca Chica, Texas today.  It's exactly 31 days since they started building SN4 and hours short of 21 days since SN3 failed during it's testing on the night of April 3rd.

Drone's eye view of SN4 on the pad today.  I prefer this for the sense of scale you get looking down on the cars and trucks as opposed to looking up at the booster from the ground.  If I'm remembering correctly, these Starship prototypes have all been about 100 feet tall and more than 10 feet in diameter.  Photo credit to Elon Musk on Teslarati.