There's a saying that goes, “A society grows great when old men plant trees whose shade they know they shall never sit in.”  I've always taken that to mean when we do things that are for the good of people who come long after us.

Maybe it's a reach to apply that story here, but Amazon founder Jeff Bezos and MIT Professor Danny Hillis have embarked on project that has an even farther off payoff than planting a tree today.  They've begun construction of a clock that Hillis first conceived of in 1986; it's a clock that will tick just once a year and chime once ever thousand years.  Called The Clock of the Long Now, it's designed to keep time for 10,000 years.  Purely mechanical.  It will be powered by day/night thermal cycles and optomechanically reset daily at solar noon to phase lock the clock to solar time.  Talk about trees whose shade he'll never sit in, Jeff will never even hear this clock chime unless it's in a special qualifications test.

It's safe to say that someone who would fund this has to have money to spare, and while Professor Hillis is a millionaire, the project is being funded by Bezos.  At $42 million, the equivalent of change found between the sofa cushions to the World's Richest Man, the clock is being built on land that Bezos owns in the Sierra Diablo Mountains of west Texas.


How does the clock work? Well, the longness of the time involved is the big engineering challenge. The clock is designed to tick just once a year and chime once per millennium. Experts are blasting rooms out of the interior of the mountain in order to install steampunky piles of gears and flywheels. 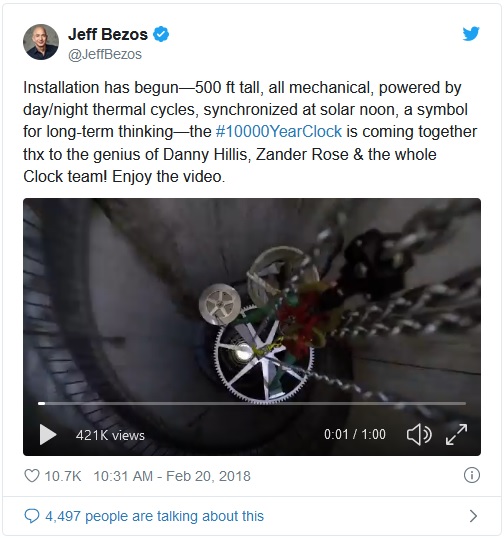 The tweet and video can be viewed here on Twitter.  Jeff has put up a website dedicated to the clock and is soliciting ideas for things it could also do.

If you're puzzled about what could motivate a couple of guys to create a clock intended to keep time for 10,000 years, well, join the club.  The original source I ran across at Popular Mechanics said, “Bezos explained the clock as a way to remind people that the far future not only exists, but will happen to their descendants.”  Wikipedia's article includes this note.


In the words of Stewart Brand, a founding board member of the foundation, "Such a clock, if sufficiently impressive and well-engineered, would embody deep time for people. It should be charismatic to visit, interesting to think about, and famous enough to become iconic in the public discourse. Ideally, it would do for thinking about time what the photographs of Earth from space have done for thinking about the environment. Such icons reframe the way people think."[2]

They're talking up the clock as if it will be some sort of attraction, but it's also remote and hard to get to.  That implies most people will never be able to ever see the clock in person.


The clock itself, though, seems a lot more like a Howard Hughes-esque whim or a Crazy Horse Memorial kind of distant vision. “Visiting the Clock will take a commitment," the website reads. "The nearest airport is several hours away by car, and the foot trail to the Clock is rugged, rising almost 2,000 feet above the valley floor.”

The self-righteous, environmentalist-sounding aspect of why they're building the clock makes me want to hate them, but I don't.  As far as I can tell, they're doing it all on their own property with their own money and people can do whatever they want with their own money as long as they don't hurt other people.  It looks to me like another situation where a billionaire creates a bunch of jobs.  He wants something and hires a team to do it.