No. Just No, the Coronavirus Was Not Caused by 5G Cellular

While poking around on some links on the Kung Flu, Mrs. Graybeard stumbled onto a thread of news stories that are so frankly insane that they just can't be responded to.  People are trying to burn down what they think are 5G Cellular towers because they believe the virus is caused by 5G.  If they believe there's a virus at all and it's not just the 5G.  From Sky News in the UK:


Several videos claiming to show 5G towers on fire were posted to a page on Facebook which was created on Thursday and taken down by the platform on Friday.

Campaign group The Centre For Countering Digital Hate said the first footage was posted to Instagram by a local man under the name of paddymann123 at 10pm and was viewed hundreds of thousands of times.
...
A different video posted on Twitter on Thursday, showing two men installing 5G cables under a road being berated by a woman claiming that 5G kills people, received 1.6 million views on Twitter.

They also posted this scorecard of 5G towers to be destroyed. 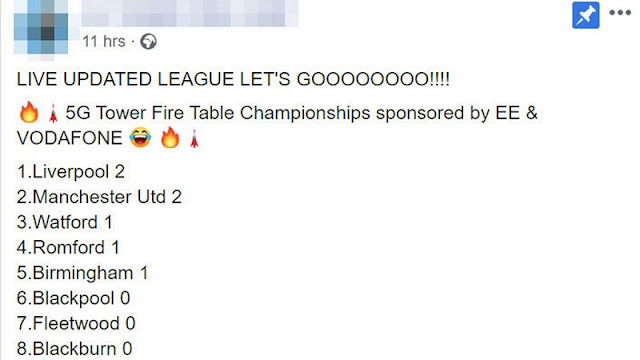 
5G is being tested around the world as we speak but there are conspiracy theories that claim that 5G is the cause of COVID-19, the Corona Virus. The theory also suggests that 5G sucks the oxygen from the lungs and causes people to drop dead. If this can even be called a theory. Interestingly people are actually believing this.

They include a Twitter video from a Britt Twit who doesn't exactly say 5G sucks the oxygen out.  She says it causes the hemoglobin molecules in blood cells to be unable to bond to oxygen and carry it.  Which makes just as much sense and has just as much evidence as radio sucking oxygen out of the lungs.

There are people saying the Coronavirus is fake, that it's a plan to wipe out the population carried out by Bill Gates.  Unlike Ted Turner or other self-declared heroes of the environment, I've never seen anyone quote Bill saying he wants to kill off 95% of humanity.  The argument is that Wuhan had their 5G network operable last November and then people started dying.  Therefore it's not the “fake ass virus”, it's the 5G, so I guess there's no such thing as coincidence in the world?  Good thing nobody told them places in South Korea and the US had 5G systems running before Wuhan did, so if it was 5G, the disease would have been in those places first, not in China.

A guy I used to work with had a saying for times when someone in discussion brought up the most irrational things you'd ever heard; “you just can't argue with logic like that” and you really can't argue with people saying things like that.  Anyone who would say a virus that can be seen in an electron microscope isn't real, or say that viruses in general aren't real, isn't going to understand your evidence and their standards for what constitutes evidence will leave you speechless.