Shop Update for the Week

I've been doing shop updates on my little engine project on roughly a weekly basis, and since it fills the gaps with the slowdown in Space activities just up the road, it seems to fit.

Last week, I was talking about making a fixture to drill a couple of critical holes across the piston; that part I've been working on entirely too long.  I felt pretty confident that would work but wondered if that wasn't overcomplicating things.  The alignment relies on two features being aligned; could I eyeball them into proper alignment?  The features are a slot in the piston being horizontal and two tapped holes being vertical.  All of those features are visible in last week's post.

So I spent several hours experimenting, taking pictures and trying to measure how close to properly aligned things were.  I used a gauge pin (.250 diameter) standing on end and then the spotting drill, looking at the picture under magnification and trying to see if lines between the objects looked adequate.  They sure seemed to: 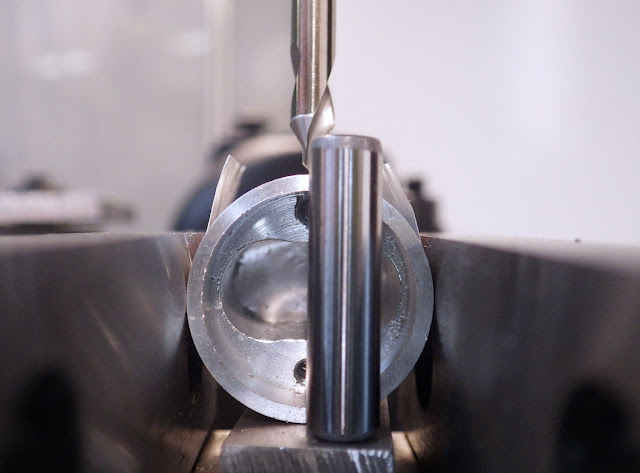 The pin is just a little to far to the left in this shot, the hazard of setting this up by eye and the reason I used the magnification and lines drawn on the photos for reference.

Once I convinced myself that this method of alignment was close enough, the actual drilling took nowhere near as much time, and I finished the piston in a an hour. 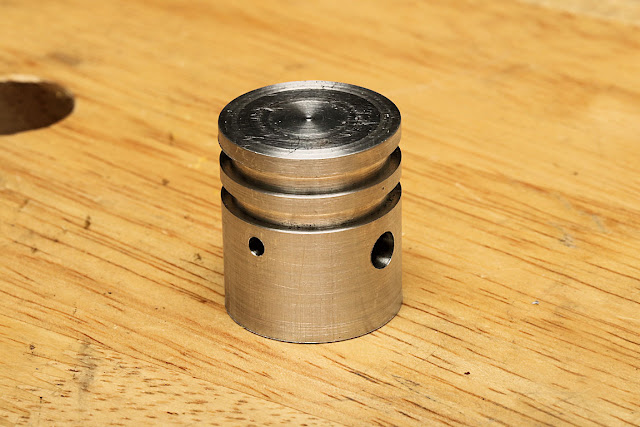 As a side note, it never ceases to amaze me just how dirty things really are that I've just spent time and effort cleaning to get them ready for pictures like this.   You should see the inside of this piston.

There's a couple of parts that need to be finished for the piston.  The first is the wrist pin that goes in that big hole and through the piston, that's a piece of standard dimension steel rod that gets cut to length and a couple of flats milled on the ends for the setscrews that hold everything together.  The small hole gets a piece of 3/32" diameter brass tubing to carry oil into the piston from an external oil cup.  Since I don't have any tubing like that, I chucked up a piece of 1/8" brass rod, trimmed the diameter to .094 to match the hole and drilled a 1/16" hole along its long direction.  The wrist pin is held in a connecting rod, and I've cut a rough-sized blank to make the conn. rod from. 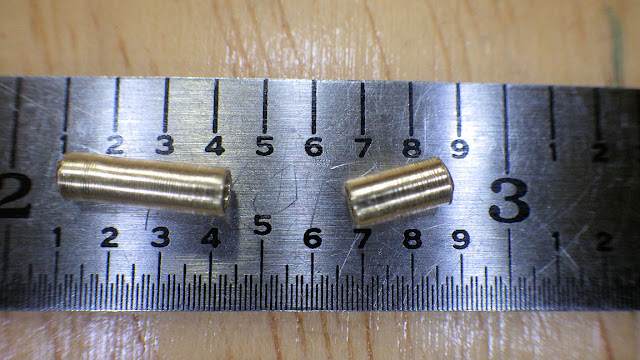 I mistakenly made the one on the left too long, and in parts this small, it's easier to start over and make another properly.  That's the one on the right.

And that's the state of things today.  A slow pace but much faster than the months when I didn't get near the shop.