SpaceX's Latest Starliner Failure Was Most Likely Not the Problem

According to Elon Musk, as quoted by Telsarati the buckling collapse and failure of SN3 in its second set of tests was likely due to test design error or operator error.  I didn't cover the story of the test failure over the weekend since I saw it in a few places and figured most people knew it happened but there was no coverage of why until today.


On April 3rd, SpaceX initiated the third full-scale Starship prototype’s first cryogenic (ultra-cold) pressure test by loading the ~30m (100 ft) tall rocket’s upper propellant tank with what was likely 400+ metric tons (~900,000 lb) of liquid nitrogen. For several hours, liquid nitrogen – a chemically-neutral propellant simulant – was loaded and offloaded several times. Finally, around 2:07 am local (07:07 UTC), the liquid oxygen tank below the methane tank abruptly crumpled, reminiscent of a plastic bottle with the air partially sucked out of it. After several long seconds of gradual crumpling, gravity did what gravity does and pulled the heavy upper tank to the ground, shredding the rest of the rocket’s thin steel skin.

Both unfortunate and a positive development, Musk has recently confirmed Teslarati’s earlier speculation that based on videos of the anomaly, a bad test design and operator error(s) – rather than a technical fault of the rocket itself – could have been the cause of Starship SN3’s failure. In other words, barring future operator error-related failures, Starship SN3’s second cryogenic test went quite well and should mean no delays to Starship SN4’s ongoing assembly.

This two minute (1:55) video from NASA Spaceflight shows the critical moments and the buckling failure of the lower portion of the Starship, the liquid oxygen tank, in the first 20 seconds of video.

In his explanation, Musk revealed that the rocket failed because the lower (liquid oxygen) tank had not been pressurized enough to withstand the stress of a methane tank fully loaded with liquid nitrogen. Musk’s description almost makes it sound like one or several people failed to account for the fact that liquid nitrogen is nearly 25% heavier than the cryogenic methane it was simulating.

As the quotes from the article mention, construction of Serial Number 4 is well underway.  Musk said that they would examine and possibly reuse the thrust section of SN3.  Eric Ralph at Teslarati notes that based on some construction steps during the construction of SN3, he concludes that SN4 is four weeks behind SN3, so four weeks away from the launch pad. Assuming the same speed of production, assembly, and outfitting, of course.  Of course, everyone is hoping to see them mount these raptor engines on the Starship and have it hop around the south Texas beach, just like Starhopper did last summer. 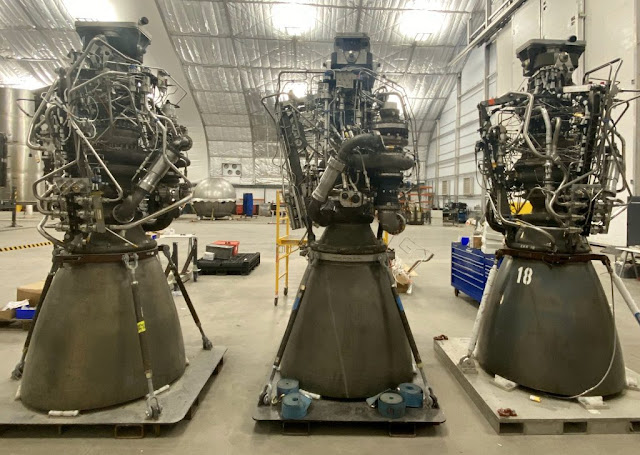