Boeing Continues Their Fall From Acceptance

A news item on Ars Technica last Friday opened with a quote from NASA's acting chief of human spaceflight, Ken Bowersox, that probably caused collective shivers in the halls of all the big Defense/big Government contractors:


“... I have decided to eliminate Boeing from further award consideration.”

Let's start with the Boeing 737 Max.  Everyone knows those stories, that the most recent model of one of the most successful Air Transport aircraft has been grounded for a year after two crashes that killed 346 people between them, collectively making for the worst air disaster since September 11, 2001.

I wasn't aware of the issues with the company's KC-46 Pegasus tanker program, which is $3 billion over budget, three years behind schedule, and beset by technical issues.  In March, the Air Force revealed that it had upgraded chronic leaks in the aircraft's fuel system to a Category I deficiency. This is a problem for an aircraft that is supposed to perform aerial refueling.

Of course, we've covered the deficiencies in the Starliner capsule test flights here (one, two, three, four) along with the fact that Boeing is the prime contractor for the Space Launch System, which is several years late and billions of dollars over budget.


Since December, the company's space issues have also become more widely known following the failure of the company's Starliner capsule to successfully carry out a test flight to the International Space Station. NASA labelled this aborted mission, during which the spacecraft was nearly lost two times, a "high visibility close call." The company has agreed to perform a second test flight without crew to assure NASA of Starliner's safety.

The article on ARS summarizes Boeing's meteoric fall from grace with NASA and is worth a read.  I'll extract some highlights here.


But a new document released by NASA reveals the broader scope of Boeing's apparent decline in spaceflight dominance. The "source selection statement" from NASA explains the space agency's rationale for selecting SpaceX over three other companies—Boeing, Northrop Grumman, and Sierra Nevada Corporation—to deliver large supplies of cargo to lunar orbit. NASA announced its selection of SpaceX for this "Gateway Logistics" contract in late March. The selection document says that SpaceX provided the best technical approach and the lowest price by a "significant" margin.
...
When comparing the selection rationale for the 2014 commercial crew contracts with the rationale for the recent Gateway logistics contract, the perception of Boeing's offering could not be more stark. In 2014, Boeing was very much perceived as the gold-standard—expensive, yes, but also technically masterful. In 2020, the company was still perceived as expensive but not ultimately worthy of consideration.
...
Six years later, the perception of Boeing's bid for the lunar cargo contract is much changed. Of the four contenders, it had the lowest overall technical and mission suitability scores. In addition, Boeing's proposal was characterized as "inaccurate" and possessing no "significant strengths." Boeing also was cited with a "significant weakness" in its proposal for pushing back on providing its software source code.

Due to its high price and ill-suited proposal for the lunar cargo contract, NASA didn't even consider the proposal among the final bidders. In his assessment late last year, NASA's acting chief of human spaceflight, Ken Bowersox, wrote, "Since Boeing’s proposal was the highest priced and the lowest rated under the Mission Suitability factor, while additionally providing a conditional fixed price, I have decided to eliminate Boeing from further award consideration."

NASA itself is in danger of the same collapse.  Looking over 10 year old blog entries, as I've been doing, I recently came across one from 2010 where I advocated shuttering the agency.  I thought they were nothing but an arthritic bureaucracy back then.  But NASA is still relatively admired among government agencies by the public and is currently working with new intensity to meet President Trump's goal of returning America to the moon to stay by 2024.


It is notable that the most likely scenario involves launching crew and a lander on the same rocket, which would require Boeing to both complete the Space Launch System rocket's core stage—under development for nearly a decade now—as well as a brand-new second stage called the Exploration Upper Stage before then.

I lump Boeing getting the SLS and the new EUS flying in time in the "Fat Frickin' Chance" category ("only he didn't say frickin'").  While America seems to largely still admire NASA, the advent of commercial space and SpaceX's emergence as a dominant force in the world's launch industry seems to be getting people to see that commercial companies are results-oriented, while NASA is a typical government income redistribution project, and many in NASA see that as the agency's purpose, where tax money is spread among lots of congressional districts to ensure the program can't be killed. 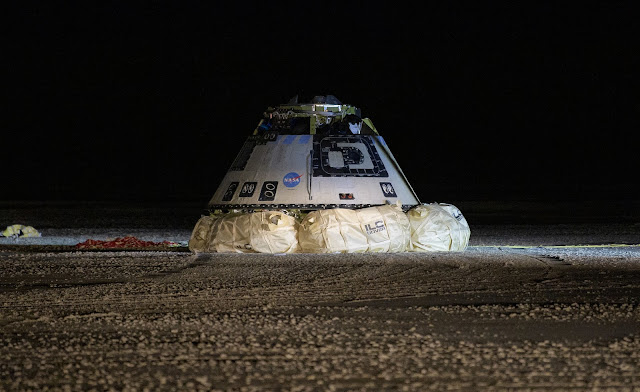 Boeing's Starliner capsule after the early end of its December mission.  I'm not going to bet this was Boeing's last launch, but I wouldn't be terribly shocked if it proved be their second to last.  They say there's nothing more permanent than a temporary Government program, but NASA's last few years may have broken the SLS's lock on congress.


Side Note:  Not a big story in terms of things to say, but Rocket Lab, the New Zealand small satellite launch company I've talked about several times, successfully achieved helicopter recovery of one of their Electron boosters.  They're not landing on a ship or concrete pad with engines blazing like a Falcon 9, but adding re-usability has to lower cost and make them a better competitor.  Video here.