As we reported on back on December 2nd, Boeing was preparing for an unmanned, Orbital Flight Test of its Starfire crew capsule this month.  The launch was before sunrise this morning, at 6:36 AM EST, so I got up at 6:15 to watch.  It wasn't until around 20 minutes into the mission that the problem surfaced.  At this time, it appears the main objective of the mission, to launch a man-rated capsule to ISS for autonomous rendezvous and docking is a failure.  Summary reporting from Ars Technica:


During a post-launch news conference, NASA Administrator Jim Bridenstine explained that the mission elapsed timing system had an error in it, with the net effect that the spacecraft thought it was performing an orbital insertion burn, when in fact it was not. The on-board computer then expended a significant amount of propellant to maintain a precise attitude, thinking it had reached orbit.

"Today, a lot of things went right," Bridenstine said. "But we did not get the orbital insertion burn we were hoping for."

When ground-based controllers realized the problem, they immediately sent a command to begin the orbital insertion burn, but due to a communications problem—which could have been a gap in coverage of NASA's Tracking and Data Relay Satellite System or some spacecraft error—those commands were not received right away by Starliner. So it continued to expend fuel to maintain a precise attitude.

By the time the commands got through, Starliner had expended too much fuel to make a safe rendezvous and docking with the International Space Station, the primary goal of this test flight.

This sounds like a silly mistake in software (and I realize it's always easier to see them in retrospect): the vehicle decided it was firing the orbital insertion burn based on one thing: the mission timer.  They could have used other sensors to cross check the mission timer's accuracy rather than just assume the timer is correct.  Starliner is safe and in a stable orbit, so some of the tests planned for the mission can be conducted, up to and including landing under parachutes in New Mexico on Sunday.  It seems that is likely to be an obstacle to Boeing getting this capsule approved for a manned flight to the ISS.


The spacecraft has operated nominally in a number of different ways so far, with good power systems, cooling, and more. However, the inability to perform a docking at the station raised the question of whether Boeing will need to perform a second uncrewed test flight before NASA allows its astronauts to fly on Starliner,.

“I think it’s too early to know," Bridenstine responded during the news conference. "We don’t know what the root cause is. I’m not saying yes and I’m not saying no."

NASA does not have a specific requirement that Starliner must demonstrate a rendezvous-and-docking before it clears Starliner for human flights, but certainly the agency's engineers would feel more comfortable with that task having been performed.

In any case, the primary issue appears to be one of software rather than hardware. Boeing may be able to convince NASA that had humans been on board the vehicle, they would have immediately recognized the problem and manually commanded the orbital insertion burn.

Whether there is an additional test flight or not, this problem almost certainly delays Boeing's crewed flight of Starliner beyond the first half of 2020. This would, for the time being at least, put SpaceX back into the lead for getting humans back into space from a US-based launch pad. A source said Friday that the company appears to be on track toward a springtime launch of astronauts on board the Crew Dragon vehicle.

Interestingly, from before this morning's launch, again sourcing Ars Technica:


After funding several development efforts in the early 2010s, NASA down-selected to Boeing and SpaceX in 2014 to finalize design and development of their commercial crew vehicles. All told, the agency has paid Boeing $4.8 billion and SpaceX $3.1 billion for Starliner and the Crew Dragon spacecraft, respectively.

I read within the last couple of days that SpaceX is planning their next major test of their Crew Dragon craft, the in-flight abort test, “no earlier than” January 11th.  SpaceX flew their equivalent of today's Boeing mission last March. 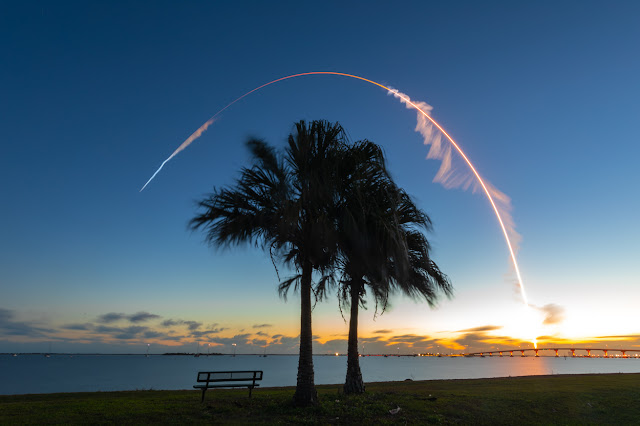 This morning's Boeing Starliner Atlas 5 mission, Trevor Mahlmann photo.  This appears to be across the Indian River lagoon, so probably from Titusville, looking southeast toward Cape Canaveral.