Lightning: Gamma Rays, an EMP, and UV Halo; All in < 1 Second

That's the subtitle to an Ars Technica piece on lightning science as measured by the International Space Station.  The new work is made possible by a piece of hardware called the Atmosphere–Space Interactions Monitor (ASIM), an instrument built by the European Space Agency that's attached to its lab module on the ISS. It's an impressive piece of hardware, tying together two X-ray/gamma-ray detectors, three UV detectors, two optical-wavelength light meters, and two high-speed cameras.  All of the instruments have to be synchronized to the same timing so that the sequence is the same between them.

The details of a lightning strike are simply amazing.  Until recently, no one could capture data fast enough to conclusively demonstrate the amazing physics going on in a lightning strike.  I'll cut to the most interesting few parts and put them here; as always, I recommend you Read The Whole Thing.


A paper released by Science today describes ASIM's imaging of a single lightning bolt, which took place in 2018 off the coast of Sulawesi in Indonesia. Optical activity heralded the formation of the lightning bolt and started to intensify about 200 microseconds before the gamma rays began registering in the detectors. The gamma rays were primarily in the form of a transient flash lasting about 40 microseconds, but there was a "long" tail of emissions that extended out to 200 microseconds as their energy gradually declined.

UV light started arriving right at the same time that the gamma-ray burst hit. The initial UV light was produced by ionized oxygen as the lightning bolt moved through the atmosphere. But the UV shifted to what's called an "elve," which is a different phenomenon entirely. In the case of elves, the light is the result of an electromagnetic pulse produced by the lightning bolt itself. This travels into the ionosphere, a sparse layer of ionized gases that starts about 100km above Earth and extends up to roughly where the ISS orbits. Because the pulse takes time to reach the ionosphere, there's a delay between the lightning and the appearance of the elve.

In this case, that delay was about 10 milliseconds, but the elve persisted for a while. That's because the pulse spreads like a balloon being inflated, tracing out an expanding sphere above the Earth. Different areas of the ionosphere get excited as the sphere makes its way through, ultimately causing UV emissions to extend over a radius of up to 800 kilometers.

All of this took place in under 300 milliseconds.

It was only six years ago that a form of energy called Dark Lightning was first documented showing gamma rays, the highest energy radiation in the electromagnetic spectrum, can be created in lightning strikes.  If that's not energetic enough for you, they also found lightning caused the production of antimatter.  That was previously only been shown on Earth with particle accelerators.

These details don't surprise me.  I've talked extensively about my lightning strike last August; about the things damaged and then the latent damage that seemed to lead to failures around the house, up to replacing our water heater in early November and then replacing Mrs. Graybeard's computer around Thanksgiving.  One thing I mentioned was having battery operated, “atomic clocks” (clocks which sync via a receiver tuned to WWVB) that reset to 00:00 on January 1.  That seemed more like an EMP stuff rather than induced RF fields; WWVB is on 60 kHz - the frequency components of lightning are higher than that so there should be low energy at 60 kHz.  The frequency components from lightning spread from several times 60 kHz up into the low VHF range.

One of the things I posted was that while preparing for Hurricane Dorian, I noticed the telltale signs of lightning damage to a palm tree about 25 feet from my radio tower and around 10' taller than the tower.  I concluded by saying:


I'll know within the next couple of months if the palm will survive the strike or if it's already dead and just doesn't know it.

It became evident that the tree was dead by the beginning of November.  Palms grow from a point at the top of the visible trunk, hidden in all the vegetation growing up there.  By the start of November,  all the fronds were hanging down, brown and dead.  The peak of the tree broke off and fell to the lawn.   Here's a closeup of the top of that palm from September 3rd (probable lightning burn highlighted): 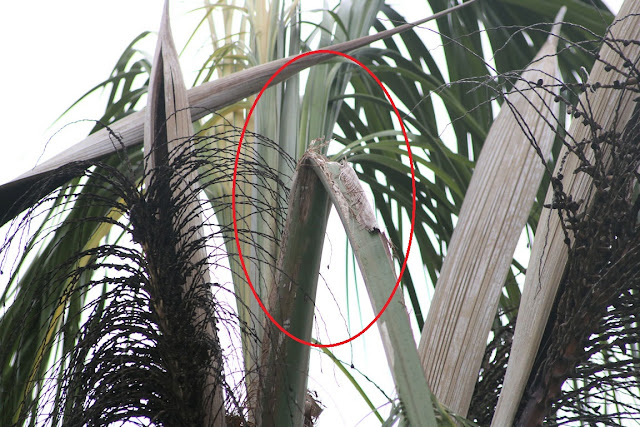 Here's a different view of the trees a few minutes ago: 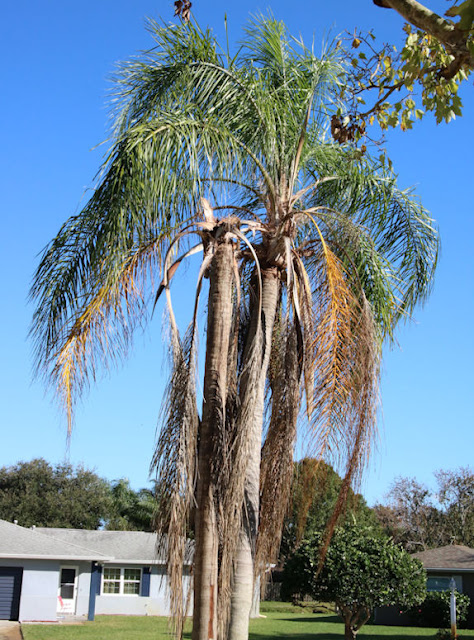 The palm on the left was hit - you can see just up from the bottom of the frame that the bark has been falling off the tree revealing the darker trunk under the outer surface and the top is gone.  It looks nothing like the other tree.

Kind of uncharacteristically, I called a tree service to see what they'd charge to take it down and haul it away.  The guy took one look at the tree and said that the second tree is dying and he'll just have to come out in a few months for it.  The trees have a fungus called (and I swear I'm not making this up) Butt Rot, or ganoderma.  Since their trunks have been almost touching for 30+ years, you can be sure they have one massive root ball and any fungus on one is getting into the other.  There's an obvious growth at the bottom of the one on the left that looks like a large mushroom that's part of the disease, but I didn't poke at it or try to break it off .  There's a black area on the trunk of the one that's still alive that's an early sign of it. 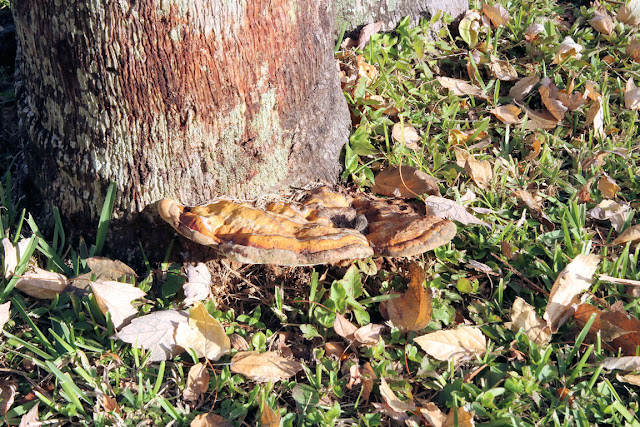 These two things merged into one story in my mind.  For years, I've been saying that if you're not even a little bit afraid of lightning, you just don't understand the problem.  I thought I understood the problem, but I've learned enough from our strike to start wondering if I'm afraid enough.