Today is the day of the Winter Solstice - which is the moment the sun stands still at the southernmost point on its north/south cycle.  To be more specific, the moment the sun stands still is 11:19 PM EST according to the website Time and Date (dot com!)  From this day on, every sunrise will be a little farther north and a little earlier until June's summer solstice (ignoring DST).

How about a couple of solstice fun facts?

The motion of the sun in the sky traces out a curve called an analemma, and this is usually printed on globes.   You can photograph one of these yourself if you care to dedicate a camera to doing nothing else for a year as photographer István Mátis did using the view from a window in his apartment in Romania.

The trick is to start about now when the sun is as low on the analemma as it will get.  That sets the lower right end of the analemma.  Set up a camera on a tripod pointing out a window with a good view of the southeast and use a normal focal length lens.  You take a photo at the same time every few days (or once a week) - it doesn't have to be sunrise - and you'll get something like this, if you're good ... or lucky.  Once a week is a good, round number and you pretty much can't make the weekly exposures too short.  You expose very short exposures so it just captures the sun and one day out of the year that you think looks pretty enough, take a longer exposure to capture the sky.  This is probably a good use for a film camera that can do multiple exposures and an old roll of film that will only get the one picture on it. 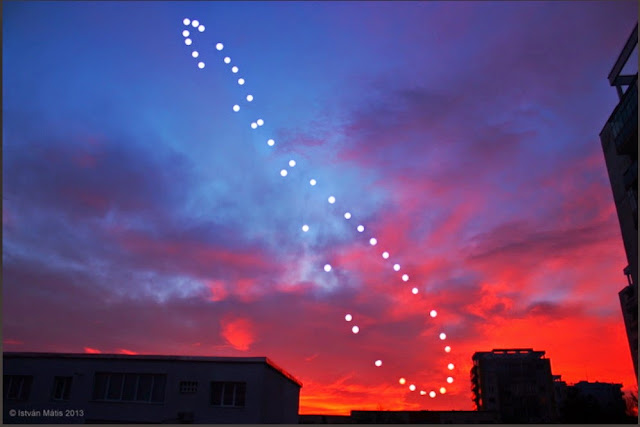 More details here.  My guess is that the gaps in the pattern were caused by cloudy days.