Keeping an Eye On the Quiet Sun

An interesting post on Watts Up With That (WUWT) yesterday pointed out that we're about to cross a historic milestone:  2019 will be the year with the most zero-sunspot-days in the satellite era.  As of yesterday (12/12), when this was posted:


So far this year the sun has been blank (i.e., no visible sunspots) for 266 days and, barring any major surprises, it’ll reach 269 days early next week which will be the quietest year in terms of sunspots since 1913 when the sun was spotless for 311 days. In fact, the current stretch of consecutive spotless days has reached 29 and for the year the sun has been blank 77% of the time. The current record-holder in the satellite era for spotless days in a given year is 2008 when the sun was blank for 268 days making the 2008-2009 solar minimum the deepest since 1913.

We've talked about this being the weakest sunspot cycle in over a hundred years, and how this is a mechanism for the way solar activity can impact climate.  The mechanism is counterintuitive to many people, but was first proposed by Henrik Svensmark of the Danish National Space Institute in Copenhagen.  The Earth is constantly bombarded by galactic cosmic rays; high energy radiation from sources elsewhere in the galaxy and even beyond.  The solar wind, the constant push of charged particles ejected by reactions in the sun, ordinarily keeps some of those particles from reaching the earth.  During solar minima, the solar wind weakens and more charged particles make it into the atmosphere.  There, just like in the old cloud chambers used to detect particles coming out of particle accelerators, those cosmic rays increase cloud formation acting to cool the Earth.

Svensmark's hypothesis was first demonstrated in the laboratory, but measurements of cosmic rays have been going on for much of the space age.  Cosmic rays have been increasing for the last four years, coinciding with cycle 24's extended solar minimum that we're in, exactly as Svensmark's hypothesis predicts.  This plot shows measured cosmic ray flux from cosmic ray monitoring balloons over California and neutrons penetrating the atmosphere to ground level in Oulu, Finland.  The balloon data includes measurement error bars on every data point. 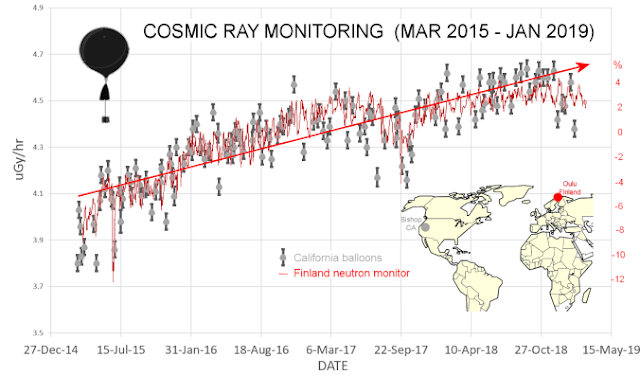 Both ground level and high altitude cosmic ray measurements are up since March of '15.

If you want to keep your metaphorical eye on the sun Sunday to see if we've surpassed the record, current sunspot numbers can be looked up in a variety of places.  Spaceweather has them (and says today the spotless day count is 267).   I use ham radio sites like QRZ.  Since 267 isn't the number of consecutive days without a sunspot, it's virtually certain that we'll pass the 269 before the end of the year, even if it's not on Sunday.  Today is only the 30th consecutive day without sunspots.

By the way, it's pretty common for people to say that with the solar activity the lowest in over a hundred years, that we could be headed for an ice age.  It's not that simple or straightforward.  Going back to a quote from WUWT


[T]he year 1913 cited earlier for its lack of sunspots on the order of 311 days was a year filled with wild weather extremes including the hottest temperature ever recorded on Earth in Death Valley, CA. For more on the extreme weather of 1913 click here.

Are we headed for another Maunder minimum?  Nothing in this article changes any of those predictions.  The various predictors don't say that - they lean toward another weak cycle like this one, lasting until about 2030, and then a little higher after that.  One predictor, Dr. Valentina Zharkova, is predicting the low lasts another cycle, possibly two, beyond 2030; that would mean these low solar activity levels until 2052.  For my fellow hams, I'd say to work on your lower frequency systems, say 160 to 20m.

UPDATE: Dec 16 1630 EST:  The record was broken Sunday.  From Spaceweather.com

Since the all-time record for spotlessness is 311 days, and there aren't 41 days left in 2019, we won't break it this year.  Deep, long lasting solar minima are a characteristic of weak cycles; as the 2008-'09 minima demonstrated, so it's a possibility that 311 will fall as the record next year.