Two stories that are there just because they both came up on this busy day.  In a way, they're both because of the elephant in the room, the impeachment boondoggle.

I find this story reminiscent of what I posted eight days ago about the FISA courts.  My argument is the FISA court should publicly slap the FBI around for lying to it.  If you watch any network except Fox last night, you wouldn't know the court did just that.


A complete and total blackout. That was how ABC, CBS, and NBC reacted on their Tuesday evening newscasts when the top Foreign Intelligence Surveillance Court judge, Rosemary M. Collyer blasted the FBI for misleading the court when seeking surveillance warrants for a former Trump campaign staffer. The order was damning, accusing an FBI lawyer of a criminal act in intentionally lying to the court. It added that the court’s confidence in the FBI’s evidence was so shaken they needed extra oversight for all cases.

It's not as much face-slapping as what I proposed they should tell the Fibbies, but the spirit is there.  Judge Collyer said,


The frequency with which representations made by FBI personnel turned out to be unsupported or contradicted by information in their possession, and with which they withheld information detrimental to their case, calls into question whether information contained in other FBI applications is reliable.

In the wild, topsy-turvy world of the Intertoobs, there is a small but nonzero chance Judge Collyer could actually stumble across this post, so let me say one little thing: it's about damned time.  We were all thinking you're as corrupt as the FBI since you didn't publicly slap them down.  This restores your honor.

One of the other things going on that's hiding in the press bubble around the impeachment is that Congress is submitting another budget bill doing their usual end run around actually legislating.  Their $1.4 Trillion dollar spending package is the kind of excess and out of control spending that Trump said he was tricked into signing “last time” and swore he wouldn't do it again.  Clearly congress is hoping the president is so weakened by the impeachment that they can do anything they want.

It's the usual turd package.  The funding bills dismantle three Affordable Care Act taxes: the “Cadillac tax” for good medical plans, the medical device excise tax and a health insurance tax.  All well and good, but they don't kill off the ACA - they kill funding but keep the expenses.  They raise the age of tobacco purchases from 18 to 21, secure coal miner pensions, and extend the Export-Import Bank of the United States for seven years.  There's $25 Million for gun violence studies, a 3.1% pay raise for military and civilian government employees, $1.5 Billion for the overdosing junkies opioid crisis.

Part of the spending is $738 Billion for defense, and the National Defense Authorization Act.  That's where GAT Daily reports anti-“Ghost Gun” language put into the NDAA by New York Congresscritter Max Rose.


Rose originally introduced his portion of the legislation in May to combat the increasing prevalence of ghost guns, which are assembled from individual parts that don’t meet the technical definition of a firearm under the 1968 Gun Control Act. His bill would require DHS to examine the potential for ghost guns to be used by terrorists and debrief local law enforcement agencies on its findings.

By conflating DIY guns with terrorism and obfuscating as much as possible, Rose slips the metaphorical noose around gun parts sales.  To see if he can come back some other time and tighten the noose.  Spending money to get the DHS to do this study would be such a flaming waste. The obvious first criticism is how does he know there actually is an “increasing prevalence of ghost guns?”

Interestingly, this week Pennsylvania Attorney General Josh Shapiro offered the opinion that (my words) there's no difference between an unassembled and an assembled firearm so 80% firearms should be prohibited.

Two, Shapiro claims that these receivers “may be readily converted (to expel a projectile)” which he argues is analogous to the “may readily be restored” language of the federal National Firearms Act.

He's saying there's nothing inherently different between an incomplete lower and a complete one.  One has had a few more steps of machining done than the other, that's all.  It's just machine time or machinist work.  This argument could easily be stretched to blocks of aluminum.  After all, they require more machining steps than an 80% firearm, but it's just more machining.  And if there's no difference between an unassembled anything and an assembled one, is a collection of metal tubes a bicycle frame?  Is a pallet full of bricks a house?  Is a hickory tree a collection of baseball bats?  They all “may be readily converted” to the final product for some definition of readily converted. 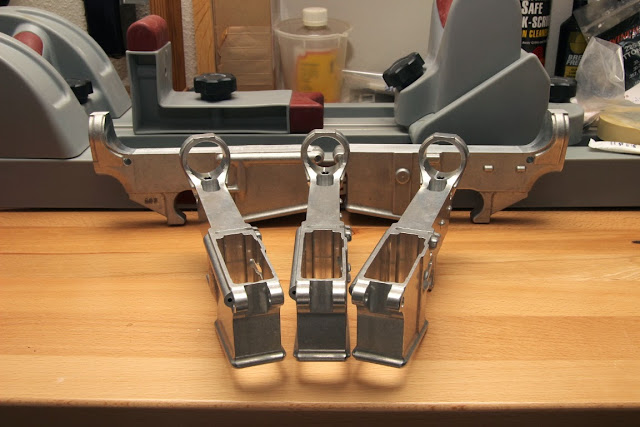 Getting back to the spending bill in the overall sense, I think it would a Good Thing to remind the president that he said he'd never sign another turd spending bill like this.