Time Magazine is Wrong But Not Completely Useless

In the December 2-9, 2019 issue of Time magazine, author Anand Giridharadas had the cover article, “How the Elites Lost Their Grip,” a (probably) self-supporting article on America's slide toward to socialism.  President Emeritus of the Foundation for Economic Education (FEE) Lawrence Reed responded to it with a detailed takedown, which includes some useful information.

Giridharadas starts by citing the well-worn analogy of the Overton window, saying the window in the US has shifted toward socialism.  The irony is that Reed says Joseph P. Overton, the inventor of the concept, “was my best friend and a senior colleague at the Michigan organization I headed for nearly 21 years (1987-2008), the Mackinac Center for Public Policy.”  From there he goes into pointing out some of the problems with the Time article.


While I appreciate the personal citations of both Joe Overton and me in Mr. Giridharadas’s article, I’m compelled to point out a few of its questionable assumptions. In doing so, I feel like the proverbial mosquito in a nudist camp: I know what I want to do, but it’s hard to decide where to begin.

For example Giridharadas cites polls that suggest capitalist uber-critics Senators Bernie Sanders and Elizabeth Warren are “top contenders” are proof that the support for socialism is growing.  If you're following the race, you know that's wrong.  Warren was very popular until she started to put a price tag onto her plans, now she's dropping in the polls.  Joe Biden is in the lead, while Sanders, Warren and Booty-judge jostle for second though fourth.  The exact stack up of candidates depends on which poll you read.


Mr. Giridharadas points to the rise in membership of the Democratic Socialists of America—from 5,000 members in 2016 to at least 50,000 today. But that’s still half the membership (113,000) the Socialist Party claimed at its all-time high, which was in 1912. The Libertarian Party’s membership today is 10 times larger.

Among young people, the story that Mr. Giridharadas completely misses is the explosion of membership and activity among groups friendly to liberty, private enterprise, and free markets—organizations like Young Americans for Liberty, Students for Liberty, Young Americans for Freedom, Young Americans Against Socialism, Turning Point USA, and the one where I serve as president emeritus, the Foundation for Economic Education. If Facebook following is any sign of relative popularity, it’s notable that the Democratic Socialists’ presence on that social media platform is a tiny fraction of that for those pro-capitalist youth organizations.

Something Time never acknowledges is that Americans don't trust government.  The Pew Research Center reports trust in government is near its all time lows:


Only 17% of Americans today say they can trust the government in Washington to do what is right “just about always” (3%) or “most of the time” (14%).  Mr. Giridharadas would do the American public a real service if he pointed out that this is the same government on which socialists want to bestow more power and money.

Reed points out that the biggest mistake Mr. Giridharadas makes is the usual socialist mantra about “capitalism is driven by evil greed.” These are the people that think anyone who has more (money/status/whatever) than you got it by stealing it from you.


Implicit throughout is his belief that capitalism is nothing more than cronyism, whereby the rich use political connections to line their pockets.

Mr. Giridharadas ignores the fact that those of us he would surely label as pro-capitalist are just as much against cronyism and corruption as anybody, and likely more so than any socialists are. We understand that the answer to cronyism and corruption is not to give government even more power and money. We support not some corrupted, capitalist straw man but genuinely free markets, limited government, private property, and the rule of law. When will mainstream media learn this distinction?

Moreover, to those of us who appreciate this distinction, the pursuit of money is not the principal objective in life. Critics of capitalism suggest endlessly that it is, but that’s infantile. The case for capitalism rests on something far more important than material wealth.

What he doesn't say is captured in this quote from economist Walter E. Williams that I've posted before.  Rather than the pursuit of money, the pursuit of helping other people will help yourself. 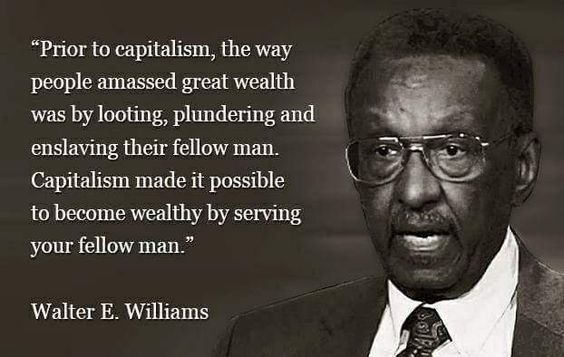 
One cannot be fully himself—or even fully human—if he must live his life and conduct his affairs according to the dictates of those with political power.  It speaks volumes that capitalism is what happens when peaceful people are left alone; socialism, on the other hand, is a Rube Goldberg contrivance with a lousy track record fueled by envy and class warfare.