New Zealand's successful small sat launch company, Rocket Lab, announced in August that in order to increase their vehicle launch rate they were going to move toward recovering their boosters.   Unlike their bigger competition, SpaceX, instead of landing boosters back near the launch site or on a drone ship at sea, Rocket Lab is going to use a parachute that get snagged in midair by a large helicopter.

This week's NASA Spaceflight.com reports that the upcoming 10th launch of their Electron booster will have modifications that will be needed for recovery and part of the launch mission is to test those mods.


Electron was never designed for this rather unorthodox method of recovery, so some changes have had to be made to the booster, known as a first stage block upgrade.

Although some previous flights have flown hardware or taken measurements in support of the Block upgrade. Flight 10 will be critically important because it will mark the debut flight of the block upgraded first stage.

The upgraded first staged includes a Reaction Control System (RCS), which will be used to orientate Electrons for recovery and guidance and navigation hardware such as a new S-band telemetry system and onboard flight computer. A parafoil is also included to allow for Electron to be “picked up” by the recovery helicopter on later missions, it is unknown if a parafoil is included on this flight specifically though.

The mission customers are paying for is the launch of seven small satellites into orbit.  I can't resist passing on that since this is going to be their 10th flight, the mission has been named, “Running out of Fingers,” but that bit of cleverness doesn't tell you anything about the flight.  The article on NASA Spaceflight.com has some details on everything being launched on this flight, so head on over there if you're curious what the small satellite launch business is all about. 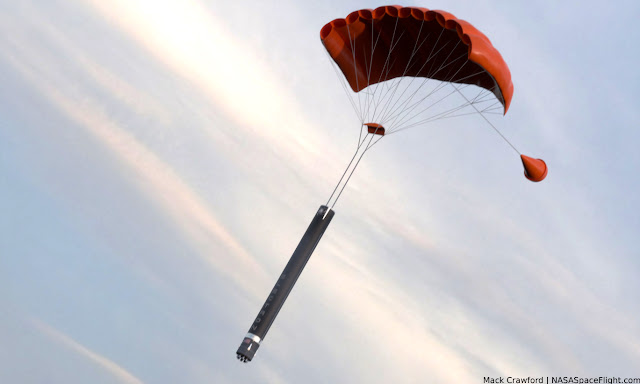 Concept art of the Electron booster under a parafoil chute, as it will eventually be flown.