It's an Old Story, But It's an Interesting Story

The story first surfaced a couple of weeks ago, got picked up by Zero Hedge, and then got picked up somewhere I saw it (I thought it was Bayou Renaissance Man, but can't find it in a few searches).

This didn't happen in the last six months or couple of years, but started in the 1990s.  My first piece on this was August of '16, but the north magnetic pole has been moving faster than ever in recorded history.  Frankly, nobody knows quite what it means.  The sheer speed at which it's happening has never been seen before.


The latest report from NOAA, the “World Magnetic Model” for 2020, shows the pole rapidly speeding in the direction of Siberia. However, the trajectory of the pole will likely change.

They don't say why they believe the trajectory is going to change, though.


“Since its first formal discovery in 1831, the north magnetic pole has travelled around 1,400 miles (2,250 km).
This wandering has been generally quite slow, allowing scientists to keep track of its position fairly easily.”

As recently as 2000, the magnetic North Pole was clocked at moving 6.2 miles per year toward Northern Russia, but data for the next two decades shows the average rate suddenly increasing to roughly 34 miles per year in the same direction, while the latest readings in 2019 show it slightly decreasing to about 31 miles per year.

The World Magnetic Model predicts the average speed will slow down to roughly 25 miles per year from 2020 to 2025.

The path the magnetic pole has taken since 1900 is interesting. 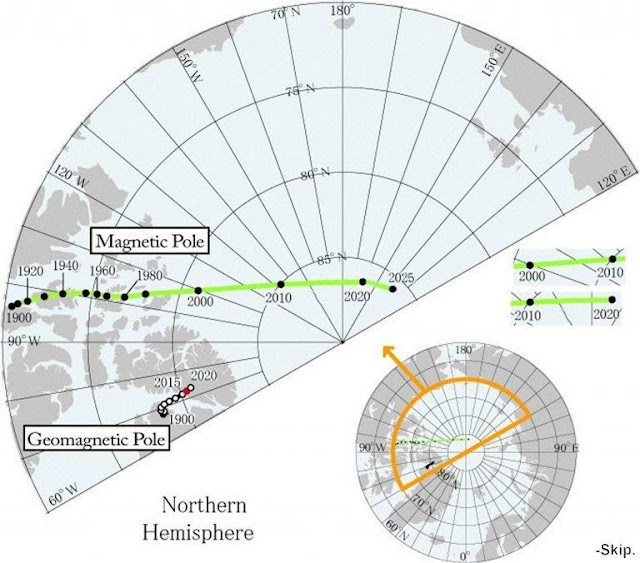 Take a look near the center of the semicircle; note that the pole has moved through the prime meridian of longitude, 0 and 180, through Greenwich in the UK. This is the first time in recorded history that the magnetic pole has moved from the Western to the Eastern hemisphere.


“The movement since the 1990s is much faster than at any time for at least four centuries.

We really don’t know much about the changes in the core that’s driving it.”

The more important thing, to me (and I don't even pretend to know anything) is that field is continuing to weaken.  In that 2016 article, that source mentioned that the Earth’s magnetic field is weakening 10 times faster than previously thought, decreasing in strength about 5 percent a decade rather than 5 percent a century.  This article mentions that the field continues to weaken.


“The decrease in geomagnetic field is much more important and dramatic than the reversal,” said Dr. Nicolas Thouveny from the European Centre for Research and Teaching of Environmental Geosciences (CEREGE) in Aix-en-Provence, France.


“It is very important to understand if the present field will decay to zero in the next century, because we will have to prepare.”

This Phys.org website article talks about the possibility of the magnetic field getting weak enough to collapse and the poles to flip, which has happened 100 times in the last 20 million years.


The last reversal occurred between 772,000 and 774,000 years ago. Since then, the field has almost reversed 15 times, called an excursion, dropping in strength significantly but not quite reaching the threshold needed before rising again. This is when we are most at risk—as the field decays and then recovers its strength. The last excursion occurred 40,000 years ago, and evidence suggests we are heading in that direction again.

'The geomagnetic field has been losing 30 percent of its intensity in the last 3,000 years,' said Dr. Thouveny. 'From this value, we predict it will drop to near zero in a few centuries or a millennia.'

Yes, that's the same Dr. Thouveny saying it will drop to near zero in a few centuries to a millennia as who talked about the possibility  it could collapse to zero in the next century two paragraphs up.

I always caution that when people are making predictions about things that haven't been measured with modern instruments, predictions are more like educated guesses.  The fact that the poles flipped 773,000 years ago is based on the best measurements with techniques that are self-consistent and thought to be good.  In my mind, that's still not as good as an ancient scroll or diary that says, "this year, compasses stopped working" followed by an entry some time later saying, "those ancient compasses are consistently pointing somewhere again, but somewhere very different from the hand made signs from before they stopped working."