Rocket Lab's test flight this morning (EST) of their booster recovery approach was a success.  According to an update at CNBC:


Rocket Lab CEO Peter Beck broke down the results of the test in a call with CNBC on Friday, explaining how the company got the booster through the atmosphere’s dense “wall” during reentry.

Instead of firing one of the booster's engines and adding legs, like the SpaceX Falcon9 and Heavy, Rocket Lab is testing a technology Beck calls an “aero thermal decelerator” — essentially using the atmosphere to slow down the rocket. After separating from the upper stage of the Electron rocket, which carried the spacecraft into orbit, Rocket Lab’s onboard computer guided the booster through reentry, successfully flipping it around 180 degrees.


“We maintained control of the stage and guided it through the narrow corridor with the heat shield and the right orientation, the right angle of attack,” Beck said. “And, not only we were able to hold telemetry on it all the way to impact at sea, we had tremendous amount of instrumentation on board that said the stage was very healthy when it impacted the ocean.”

The area of the Pacific around the calculated impact site was circled by an aircraft recording telemetry from the booster until it impacted the ocean at about 560 mph and disintegrated. 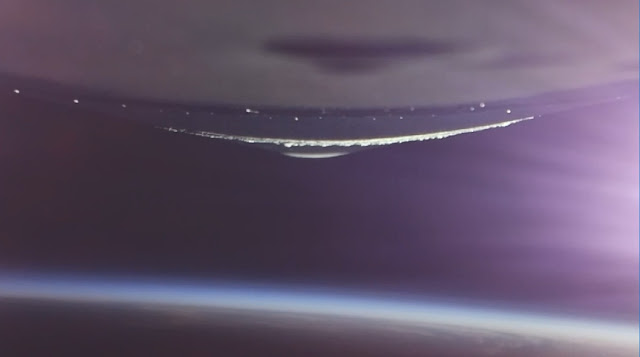 Looking toward the bottom of the Electron booster's first stage, shown at the top, and including a view of the curvature of the Earth and our atmosphere along the bottom.  Rocket Lab photo.


Back in mid-November when SpaceX destroyed their Starship Mark 1 prototype in Texas, there was reference to iterating to a Mark 2 or 3 as fast as humanly possible.  There was speculation among Twitter-watchers about whether it would be built in Texas or here in Florida, or if one would be built in each place.  Apparently, SpaceX has decided to pour the resources into Texas.  NASA Spaceflight.com is reporting:


The new vehicle, called Mk3, is already undergoing construction in Boca Chica. It is being built by a unified team, with many of the Florida-based crew members moving to Texas. By building Mk3 with a combined team, SpaceX believes that they can reach the first flight faster.

Consequently, most Starship operations in Florida are currently on hold. Activity at SpaceX’s Cocoa site has ground to a halt for the past several days.

With Florida-based crew being sent to Boca Chica Beach, Texas, work in Florida has slowed to a crawl, or completely stopped.  NASA reports the only work being done in Florida is the refurbishment to Pad 39A, which must be nearing completion.

SpaceX is grappling with the difficulty of getting something the size of a Starship from Cocoa to the Kennedy Space Center.  Cocoa is on the mainland of Florida while the KSC is on Merritt Island, separated from Cocoa by about a mile of Indian River Lagoon on the west, but also separated from the beach island by the Banana River Lagoon.  There are only a couple of bridges across the Indian River, they're heavily used by traffic and (it's said) not rated for the loads they would see.  Add to that Virgin Trains is currently constructing a new high speed train line through the Cocoa area, and a new bridge will soon block Starship’s transportation path to the KSC.  There are indications their answer is to move over onto the KSC.


SpaceX is currently preparing a facility at Roberts Road, inside of KSC, which is expected to eventually take over most, if not all, of the Cocoa operations. This will make transportation to the launch site considerably easier for future Starship builds in Florida.

There's no word what will become of the Cocoa facility.