December is Looking to be Busy with Launches

December is looking to be a busy month on the Cape, with SpaceX potentially launching four missions in the next 29 days and Boeing adding a fifth.

The first launch is scheduled for this Wednesday, the 4th, at 12:51PM EST.  A Falcon 9 will carry the company's 19th cargo resupply mission to the International Space Station.  These missions deliver crew supplies and hardware; this mission will bring some science experiments to the Expedition 61 crew.  More details on the experiments at Florida Today newspaper.

The next launch will also be a SpaceX Falcon 9 rocket, currently scheduled for “no sooner than” December 15th.  The Falcon 9 will carry the JCSAT 18/Kacific 1 communications satellite for Japan.

The last launch I have a proposed date for is Boeing's, “no sooner than” December 17th.    The Boeing CST-100 Starliner will launch an uncrewed Orbital Flight Test (OFT) at approximately 7:45 a.m. EST (1245 GMT).

The other probable launches that don't have firm dates, but that are considered likely are both SpaceX missions.  According to NASA, SpaceX will also conduct an in-flight abort test for the Crew Dragon spacecraft in December, no date set, and the company may also seek to make its third launch of 60 Starlink satellites, a repeat of their early November launch, before the end of December.

The in-flight abort test would launch from pad 39A on the Kennedy Space Center, which SpaceX has been busily renovating since signing a 20 year lease for the pad (long story here).  The two Falcon 9 launches are slated for Launch Complex 40 on the Cape Canaveral Air Force Station side. 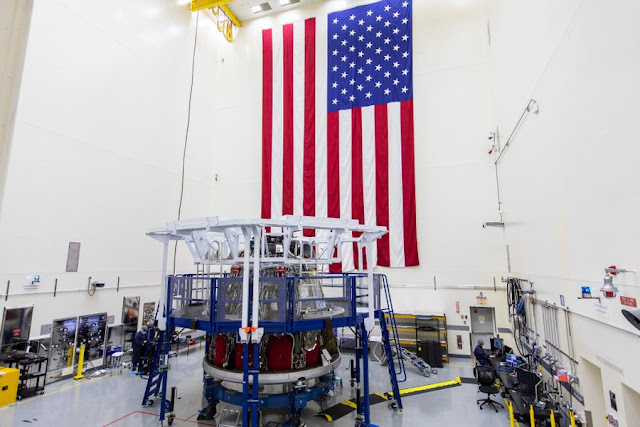 The SpaceX Crew Dragon with scaffolding around the capsule for workers.  SpaceX photo, posted a couple of months ago.