“A Cheer for the Trump Uranium Plan”

So says economist Stephen Moore at Townhall.  Me, I didn't even know there was a Trump Uranium Plan.  The article opens with Moore pointing out:


Our sources are telling us that President Trump is nearing a decision on how to revive the all-but-dormant American uranium industry. This proposed plan would create a reserve of domestically mined uranium stored in a "Federal Uranium Security Stockpile."

Moore goes on to point out many things I didn't know at all, or didn't know the extent of.


The Trump administration's assessment is that the risk of any shortage of uranium and the attendant disruption to security and nuclear power production would be far higher to the American economy than the cost of building a domestic reserve -- which is estimated at $1 billion to $1.5 billion over the next decade.

The one aspect of this that I was familiar with was the general attacks on mining in the US, led mostly by the EPA and the non-governmental agencies that sue the EPA and get rulings in court to shut down mining.  There are reserves of uranium in the US and there are reserves of the so-called “rare earth metals” that we keep hearing the US has to go to China for. Those metals used to be routinely mined in California


The problem is not that America is running out of mineral resources or that American miners can't compete. Ned Mamula, a former natural resource expert with the Department of the Interior, reports in his latest book, "Groundbreaking!" that the United States sits atop some $5 trillion of mineral resources -- most of it on federal lands. High-grade uranium can be mined in states such as Arizona, Colorado, New Mexico and Texas.  The decline is a result of a war against mining waged by liberal environmental groups that have selectively hampered or even shut down production of everything from coal to copper to rare Earth minerals and now to uranium.

That said, I like how Stephen Moore ends his article well enough to let him end mine:


One last point. While this national security stockpile may be necessary to get American uranium production back up and running, Trump should make it very clear that this is a one-time commitment, not a lifelong subsidy to the industry. We have seen from decades of subsidies to industries like solar, wind and biofuels that government handouts become de facto entitlements and impair an industry's road to free market profitability. 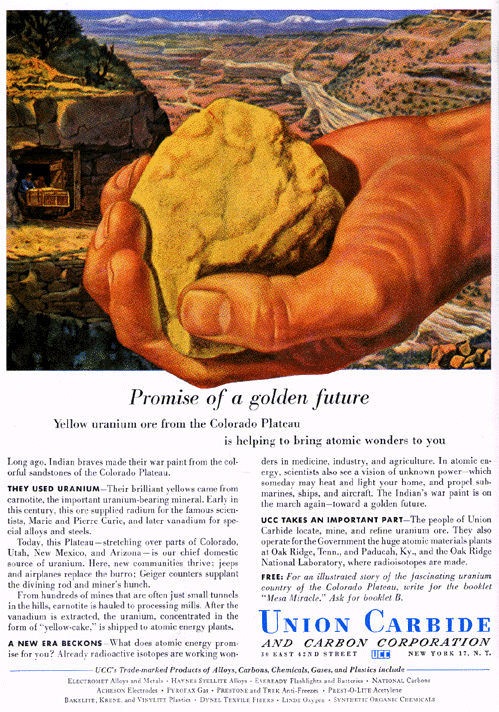 A 1950s Union Carbide ad showing the yellowish uranium ore commonly found in the southwest US.  Source of link.