Today's launch of the SpaceX cargo container to the ISS was scrubbed due to high level winds.  Currently scheduled for tomorrow, 12/5 at 12:29:23 PM.

Boeing's Starliner test capsule is on its Atlas 5 at Launch Complex 41.  Liftoff is currently scheduled for Thursday, December 19, at 6:59 a.m. EST. 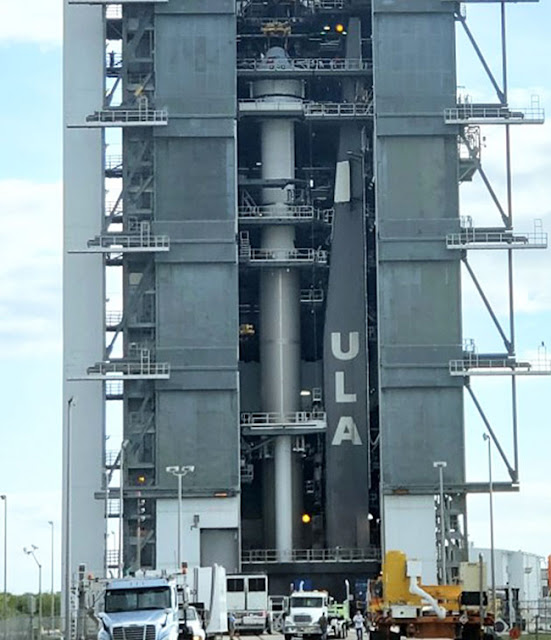 The combination is 172 feet tall, and you get a sense of that size in this photo, from Boeing.  Much like last year's test that SpaceX did of their Crew Dragon capsule, the Starliner test will be an unmanned flight to the ISS.  If successful, the second flight to the ISS will be manned by Boeing astronaut Chris Ferguson, along with NASA astronauts Mike Fincke and Nicole Mann.

Finally, there was a story that both got a chuckle and a raised eyebrow with an unspoken, "seriously?  In the 20-teens?"  If you own a Hewlett Packard computer with a solid state drive, a service bulletin released on November 19th says they have a firmware version in some drives that fails after 32,768 hours, which they say works out to 3 years, 270 days 8 hours.  There is a strongly mandated software patch for owners of these Enterprise Solid State Drives.

Some of you get it already; for those who don't recognize it: 32768 is the largest positive integer that can be expressed with 16 bits.  People who do a lot of programming see the number often enough that it gets thoroughly woven into their brain's neurons and knowing it is as much a reflex as any physiological reaction.  From the bulletin:

Checking that numbers don't go out of range should be something all programmers check, and part of acceptance quality testing of all software.  The problem is that most consumer products don't get that sort of testing.  Now think of what sort of software limits might be encroached on by a self-driving car having to react to a pedestrian who's not in a crosswalk or a kid chasing a ball into a street.