The War on Men in One Chart

It's a cliche' of these times that men are privileged and don't have to do anything to make money and get more perks in society.   Men are inherently given more social, economic, and political advantages or rights based on their sex.  The myth that women with equal backgrounds earn “77% of what men earn” gets repeated all the time.  To quote from that 2015 piece:


Maybe it's only in companies that have some government contract hiring, but every Technology company I know wants the diversity points so badly they would hire a woman over a marginally more qualified man any day of the week.  I get both Electrical and Mechanical engineering news magazines and the annual salary surveys in both fields have said for years that when adjusted for age and experience, there is no wage gap between men and women.  In general, when pay rates are looked at in any field, this is the case.

The public education establishment has been deferring to girls on virtually everything since the 90s or earlier and I can't recall how long ago it was that I first read a woman (columnist in the newspaper) talking about trying to keep her son from giving up on school because he could see boys never got called on.

Mark Perry at the American Enterprise Institute put together some rather illustrative research in a piece based on the concept “For every 100 girls/women ...” it gives the numbers of boys/men equaling that 100.


The data in the table show that on many, many measures of: a) educational, behavioral and mental health outcomes, b) alcohol, drug addiction, and drug overdoses, c) suicide, murder, violent crimes, and incarceration, d) job fatalities and e) homelessness, boys and men are faring much worse than girls and women. And yet despite the fact that boys and men are at so much greater risk than girls and women on so many different measures, those significant gender disparities that disproportionately and adversely affect men get almost no attention. 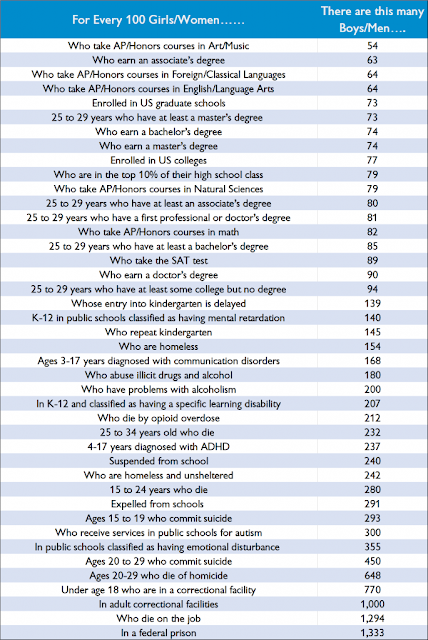 You don't have to look very long or hard to find backing for these things.  When you listen to NASA's public relations talk about the Artemis program and going back to the moon, they're rather up front about saying that the point of the first mission is to put the first woman on the moon.  NASA made a Big Deal out of the “first all-woman spacewalk” earlier this year.  In both cases: why?  I guess I never identified with the idea that if the person in any position of fame isn't just like me and my background (ethnic background, height, weight, sex or whatever) then the mission isn't valid or interesting.

Nobody should be excluded and nobody should be included because of those things.  What should matter is how well they can do the job.  Meritocracy, not identity.  I don't want my granddaughter being excluded because she's a girl any more than I want my grandson excluded because he's a boy.  Why is it that institutions can't try to include more girls without excluding more boys?  In my view, this anti-male activism that gets pushed on boys from the moment they enter grade school and persists throughout their early adulthood is what causes the bad social statistics in that table.  It leads to the formation of things like Men Going Their Own Way movement and essentially withdrawing from society.

According to Perry, the data in the table show that based on a large number of measures, "boys and men are faring much worse than girls and women." Perry explains, "Despite the fact that boys and men are at so much greater risk than girls and women on so many different measures, those significant gender disparities that disproportionately and adversely affect men get almost no attention." He added, "It’s girls and women who get a disproportionate amount of attention, resources, and financial support." He cited some examples of the wide availability of women's centers and commissions on college campuses, and the lack of men's equivalents; the disproportionately high number of women-only scholarships, fellowships, awards and initiatives for female students and faculty; girls-only STEM programs and organizations, many of which, interestingly enough, are being challenged for violating Title IX.


Multiple single-sex, girl-only computer science and STEM organizations that exclude boys including Girls Who Code, Latina Girls Code, Black Girls Code, Techbridge Girls, and Project Scientist. Some of those programs are currently being legally challenged with complaints to the Office for Civil Rights when those programs are hosted on the campus of a university that receives federal financial assistance and is therefore required to enforce Title IX’s prohibition of sex discrimination.

There are Women in Science and Engineering (WiSE and similar names) departments or units at most major universities like the University of Michigan, Rochester Institute of Technology, Syracuse University. and Georgia Tech. There isn’t a single “Men in Science and Engineering” program in the country, and there are no “Men in Nursing” or “Men in Education” programs that address the under-representation of men in those academic fields. 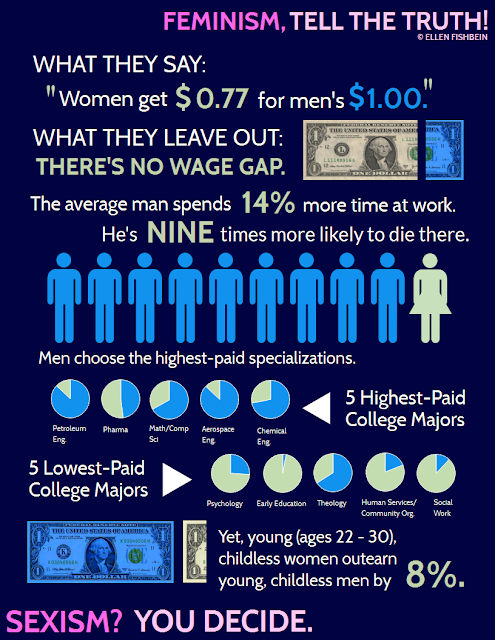 From 2015 - original source linked to this is gone.