It Has Been A Long Time Since A Shop Update

Because it has been a long time since I got anything done in my shop.  The lightning strike and repairs that followed just sucked up lots of time.  Add in that I did work in my ham shack to improve it should I ever have to work on a backup radio again, my attempts to contact that "other side of the world" island on the radio, and lots of other interruptions and I'm just getting back to my Webster engine.  I had to spend at least a day looking at it and trying to remember where I was.

My last post was back in September, and about finishing the flywheel for the engine.  The next part to do was the piston.  The piston and cylinder fit is one of the most critical parts of building these small engines; in my steam engine, I ended up making three pistons out of different materials (two graphite and one cold rolled steel).  It's hard to say which method is most common, but it seems to me more people seem to make the cylinder first and fit the piston to it.  I had made the cylinder some time ago and that was my intention.

Sometime in October, I put the cylinder back in the lathe's chuck intending to hone it to a constant diameter and smoothness.  To my fingertip, the cylinder wall felt like it had ridges on it down toward the left end in this view, so I was sure it needed to be smoothed.  To accomplish that, I bought a brake cylinder hone. 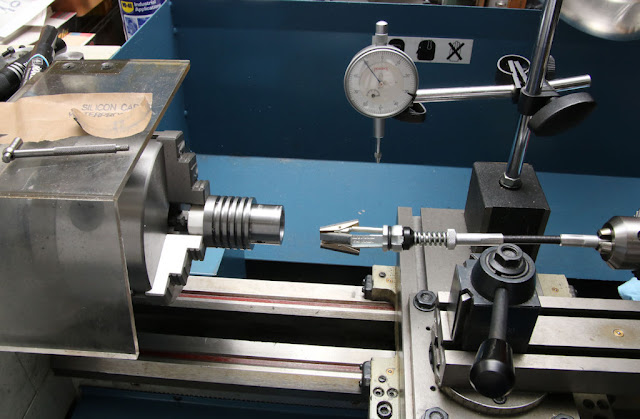 I need to talk some numbers here.  The cylinder is supposed to be 0.875" diameter - lapped smooth.  The piston is supposed to be turned to 0.873 and takes two cast iron piston rings that give that 0.875 but have some compliance.  I bought those from a guy who specializes in them.

Measuring the inside diameter of that cylinder isn't as easy as measuring the outside diameter.  A common method is to use telescopic gauges like these.  Note they all have separate knurled knob at the long end of the “T” shape.  The crossbar of the T is spring loaded and that knob locks them in the desired position.  They're locked at their minimum span, inserted to depth in the bore, then the knob is released allowing the spring to drive the measuring points to the diameter, and then the knob is tightened again locking the measurement in place.  It's tedious to measure diameter and taper this way because it requires multiple measurements and each measurement is subject to errors if the measuring points aren't exactly perpendicular to the walls, and the long part of the handle parallel to the axis of the cylinder.

I honed the cylinder for a while with the three abrasive stones on that brake cylinder hone but it didn't seem to be smoothing the cylinder.  The cylinder is curved and the stones are rectangles, so they only rub on their edges.  I wrapped the three stones with 150 grit sandpaper and that seemed to smooth the cylinder faster.  I spent a minute or two working 150 up and down the bore, then switched to 220 and repeated.  Likewise with 320 and 440.  The cylinder feels quite a bit smoother but I can still feel the roughness.  I tried taking a photo of it; easier said than done. 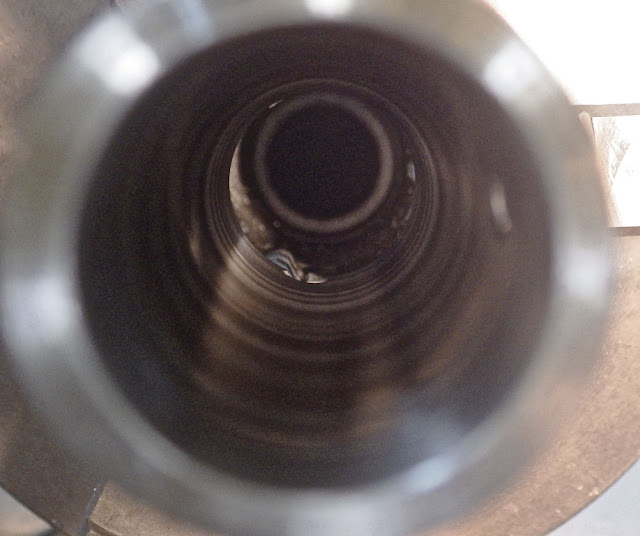 You're looking into the lathe chuck in this view (from the right looking left in that photo at top).  The light colored circle at the top is the bore through the chuck.  Just to the left of that circle's bottom center is a large bump - that's one of the chuck's jaws.  I stretched the contrast and sharpness a bit, so those light and dark rings aren't that obvious looking in there

The measurements I'm getting make it seem the cylinder is already oversized - around 0.878" - so I'm hesitant to smooth it more.  A particle of 400 grit abrasive is 1/400" or .0025 (though that much doesn't stick above the paper).  If I took off that much in diameter, it would definitely be too big.  The piston is a piece of 0.875 stock which measures around 0.874".  I haven't machined the features and details into the piston, yet.  Yeah, I could get a 1" aluminum bar and turn it down to something that's a tighter fit in the cylinder, but I have those piston rings to consider.  I have enough steel bar to make another cylinder if I had to, but I'd rather only do that if I had to.

As it so often does, it looks like I'm going to have to build it to find out if it works.