Along with being the Eve of Christmas Eve, today is the second day of Hanukkah.  Merry Christmas, Happy Hanukkah or or whatever you choose to celebrate.  You can change the words, but you can't change my warmest wishes for everything good for you and those you cherish.

I always say that churches, like all groups, have personalities, and in the one I attend, it would be remarkable to toss a wadded up paper ball and not hit an engineer, nurse, doctor, or a tech professional.  It's not news to this bunch that Jesus was probably born in the spring or fall rather than in the dead of winter, nor is it news that the December 25th date probably comes from adapting to the Roman Saturnalia or other pagan holidays; nor would they be shocked if you told them Christmas has more secular than holy traditions associated with it and many things that are totally ingrained in the holiday traditions started out as advertising gimmicks.  There was no little drummer boy when the events we portray as the nativity happened; in fact, the scene we call the nativity is a conglomeration of bits and pieces mostly from the Gospels of Matthew and Luke, and certainly did not happen within the first couple of days of Jesus' life.  Nobody knows how many magi (“wise men”) came to visit the child; we say three because of the three gifts listed, but it could have been almost any number.  Furthermore, it wasn't at his birth with Jesus in a manger; it was when Jesus was old enough to be called a child.  The scene was at his parents' home and not at an inn.

I've heard another explanation for why December 25th was chosen.  It's close to the solstice, the longest night of the year - which made it the darkest night of the year in those days. Jesus was the light of the world, and the symbolism of bringing light when things are at their darkest fits perfectly with the story.  If someone came out with a convincing line of evidence that Jesus really was born on December 25th, I'd be surprised... but not very.  We use a different calendar today than was used in those days, and I'm not sure today's December 25th is the same day as that era's December 25th.  To paraphrase that previous quote, not that it matters. 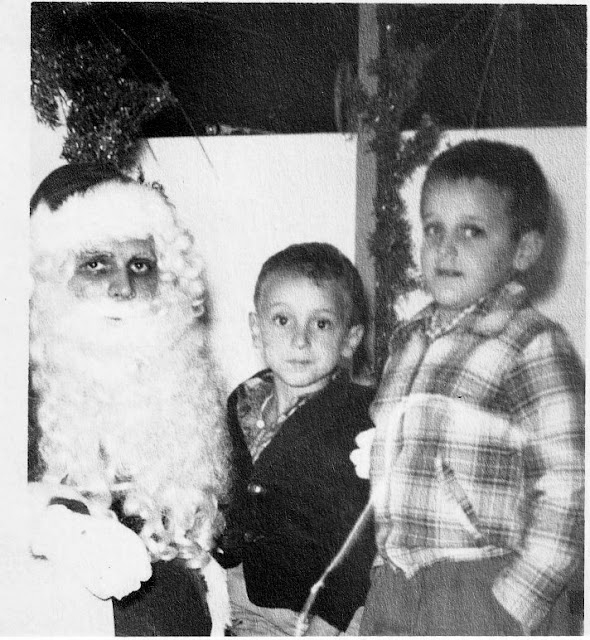 While going through my mom's things after she passed away six years ago, we found this picture.  This is my brother (on the right) and me visiting Santa.  He looks a bit more skeptical than me, but he is my older brother.  While I'm not sure of the date, my guess is it would have been around 1960, plus or minus a year or two.