Interesting, But I'm Not Sure What It Means

Although I'm sure there will be lots of folks who want to declare a coming TEOTWAKI over it.

While reading an historical piece on Watts Up With That about how a solar storm in 1968 almost convinced SAC that the Russians were jamming our radars, someone posted that the earth's magnetic poles have started moving at a much higher rate than seen before.  The North Magnetic Pole is now north of Canada and the South Magnetic Pole is north of Antarctica.  A comment included this factoid, which no one challenged:


The Earth’s magnetic field is weakening 10 times faster than previously thought, decreasing in strength about 5 percent a decade rather than 5 percent a century.

The magnetic north pole is now approaching, but southwest of, the geographic north pole.  NOAA charts both poles.  First the north magnetic pole (North is actually toward the right in this map): 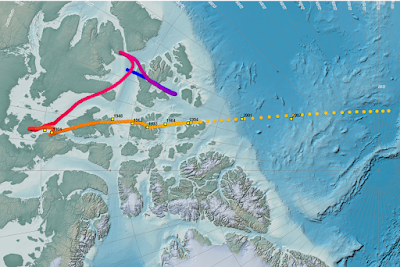 and the south magnetic pole (the South Pole appears to be above the upper left of this map): 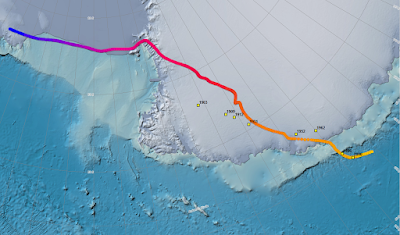 When I took my first class that included navigation by compass, the magnetic variance here on the East Coast of Florida was around 2 degrees (east).  Today it's around 7 degrees (still East).  With the precision that a compass can be read, and the distances offshore I typically boated, I could ignore 2 degrees.  I don't think 7 is small enough to ignore.

All of our lives, most of us have heard that the Earth is "due" for a North-South magnetic pole reversal with the experts saying the poles have flipped many times and it has been too long since the last flip.  The story I recall hearing was that it took a long time to happen; more like centuries than decades, and certainly outside typical lifespans.  Nowadays, there seems to be some belief that it could happen very quickly; on human timescales.


This summer, the European Space Agency published data that suggested that the Earth’s magnetic field could flip — as in, the magnetic north pole becomes the magnetic south pole — in “a few thousand years.” At the time, I figured there was no rush to write it up — after all, we might not even be living on Earth in a few thousand years. Now, however, new research published this week shows that the magnetic field might flip within our lifetime — so it’s probably something that we ought to talk about.

"within our lifetime" is such a relative term... One of our running jokes is that at our age, any subscription could be a lifetime subscription.  Still, it could well be that the process has already started, and might even have been going on for our entire lifetimes.  Earth will probably go through a period of magnetic chaos before the poles reach their (more or less) permanent positions and that could well be within the life of people reading this blog.  It's possible there could be more than one of each pole for some time so that a compass would point to two different "norths", making navigation by compass impossible.  Birds and other critters that use magnetic particles in their bodies for navigation will have a hard time, and migratory patterns would be seriously disrupted.

Where it gets really hard to predict is whether the reversal happens very quickly, say within a year, or if the period of chaos is measured in decades.  No one alive has ever seen this happen, so everything they think they know comes from looking at old rocks and computer models.  Whether the TEOTWAKI situations that you'll read about would really happen or not is just as hard to say.  There don't appear to be mass extinctions associated with previous reversals, so it appears life muddled on through somehow.

I'm hoping that with a weakened geomagnetic field, auroras may become visible farther south.  I seriously want to see auroras some day.