Techy Tuesday - How Do You Build Those Things, Anyway?

Semiconductors, that is.  Everyone knows the world is awash in electronics, from things like iPods to Fitbits, and really far more than one could ever list.  I'd hazard a guess that few people except those in the business have an idea how the integrated circuits in these things are made.  This is a topic that could fill a good-sized series of these posts, but tonight I want to focus on an improvement to the processing of raw semiconductors into integrated circuits (ICs) just announced.

To begin with, most of what you're familiar with is made from elemental Silicon.  It starts out as the most pure substance known to man, but pure (intrinsic) silicon isn't very useful by itself.  It's rather resistive, which is why Silicon is called a semiconductor - it's not a very good wire.  What makes Silicon useful is that tiny amounts of alloying elements are added to it ("doping"), producing either too many electrons in a given volume (N-type material) or too few electrons in a volume (P-type - also said to have "holes", places in the electron cloud that should have an electron but don't).  This ability to customize the conductivity of Silicon is why it's so useful and why this has become the silicon age.

Over the last 30 years or so, new materials have been developed that offer improvements in performance over silicon transistors.  The III-V (three five) materials were among the first to market.  III-V materials typically give higher electron mobility, a characteristic of their atomic structure, and are often used in High Frequency and microwave applications.  Gallium Arsenide (GaAs) was the first commercial success, and the current industry darling Gallium Nitride (GaN - pronounced with a short "a", like in can).  Another material that has a lot of interest is Silicon Carbide, SiC.  SiC doesn't achieve the high frequency performance of GaAs or GaN, but it has excellent high temperature performance because the compound has very high thermal conductivity.  This makes it a natural for parts intended for car engines, at the end of well-drilling rigs, and other places where the temperatures exceed the 150C or so that Silicon will tolerate.

There's just one problem with SiC: it's very hard.  In mineral terms, it's between sapphire's Mohs hardness of 9 and diamond at 10.  So if one has a crystal of SiC, how does one cut that thing into wafers for further processing?  Any rockhound, tombstone, or granite countertop maker would recognize the current method: a saw made of thin wires carrying a slurry of diamond grit, kind of a hi-tech bread slicer, cuts the wafers free.

As you can see by the picture, this is a time consuming process.  I find it remarkable that over the diameter of the crystal being cut (4 to 6" is common for SiC), the wire only wanders enough to cause a surface roughness of 50 millionths of a meter.  Which has to be ground away in that final step.

The big innovation is that Japanese ingot processing equipment manufacturer DISCO Corporation has come up with a laser-based technique to slice wafers out of the SiC ingot, producing 50% more wafers through reduced material losses while slashing production times by a factor of six.


Dubbed KABRA (for Key Amorphous-Black Repetitive Absorption), the patent-pending process uses a focused laser to form an amorphous layer of SiC decomposed into its constituents silicon (Si) and carbon (C), which becomes the base point for separating the wafer through cleavage.

They save material because the diameter of the wire and the diamond grit combine to lose about 200µm per wafer of SiC.  The diamond is focused below the surface of the crystal, turning the point it scans into separate silicon and carbon atoms; the wafer is cleaved off resulting in half the loss of the SiC. 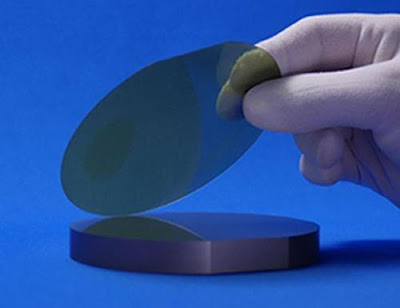 With half the loss of the diamond wire saw method, this has to drop the costs of SiC components.  Add to that the lowered cost of processing by taking 1/6 the time of the previous method, and SiC parts are about to get quite a bit cheaper.

I debated doing this story because it's rather deep into the weeds for those of you who aren't even tangentially associated with the business, but I love this sort of story.  We have a problem - if we can get enough production on SiC transistors, we can make a butt load of money - so we get a bunch of clever folks together and say, "make it better".   It's what engineers do, and it's why this is the most dynamic industry in the world.

Oh.. By the way.  The people among the farthest from the semiconductor business know silicon carbide now, but don't know it.  It's sold as the diamond simulant Moissanite.  Exactly how they produce those clear, white crystals to cut into imitation diamonds when the chemically pure semiconductor is that off-yellow color is their trade secret.