Especially anyone with Air Force experience?

I read today that an F-22 Raptor was grounded by a hive of bees on its "exhaust nozzle".  This doesn't look like a nozzle to me; but I don't know the word for it.  It looks like part of the fuselage that gets exposed to jet exhaust, but that's not actually part of the engine.

Readers can see my epic lack of knowledge of the F-22. 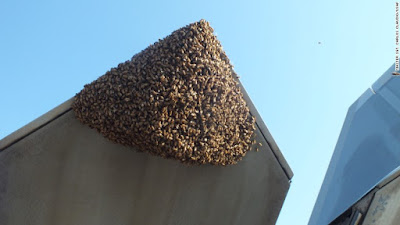 A vertical stabilizer is visible on the right, and this piece of fuselage that ends in triangle is coated in bees.  They reported "nearly 20,000 bees" and had a beekeeper relocate the hive.


Before transporting the bees to their new home at a local beer production facility, Westrich took them to his house and found that the hive weighed nearly eight pounds in total, according to the Air Force release.

OK, I get that the Air Force is trying to be all environmentally friendly and relocate the bees because "crew members realized that honey bees are at risk of extinction", but is this really necessary?

Why couldn't they just light up the engines and take off at full afterburner?  Wouldn't that kind of toast the little beasties and solve the problem?  Yeah, I know, I'm terribly incorrect here, but if they had to take off on a mission, would they really have to call beekeepers and meticulously move the colony?  Maybe toasted bees are good eatin'.  I love the smell of jet exhaust in the morning anyway, so why not toasted bees with it?