Just over a year ago, last August 19th, I posted a story about the Gen 1 Taurus Millennium series pistols and a legal settlement over allegations that, among other things, the guns would fire with the safety engaged.  I talked about my own PT-145 compact 45 being involved.  I pointed out it was not officially a recall, but they had agreed to look at, fix or replace all guns turned in.


I did the online customer service chat with them and inadvertently referred to this as a recall, asking how I could tell if my model was affected by the recall.  I was informed there was no recall, but they would look it over to make sure it was OK.  They emailed me a FedEx mailer to return it.  If they're offering to take a look at it, I'm game.

There was some talk about "like heck if I'm sending a perfectly good gun back", but I went ahead and sent mine.  In November, I posted this.


Around the end of October, the 8 weeks were up and I checked online to see the status.  They said it had been repaired, but had not been shipped.  This was a Sunday night (probably 11/1) so I figured I'd have it soon.  After another couple of weeks, I checked the status and it said the same thing, so I used the online chat feature to ask about it.

I was told they're going to replace my PT-145 with a new pistol of my choice, out of a few models they offered me.  Of course, this has to go to an FFL and I need to set up a few things, but they offered me a choice between the PT845 or 24/7 45 g2/or 24/7 45 Compact.  Since my original was most like the 24/7 Compact, I'll probably get one of these.  They're saying "4-6 months" which I'm assuming means I'll get the replacement next August - 9 months from now and a full year from sending the gun away.

They told me to set it up with my local Taurus dealer/FFL, which I did.  Of course, it's now August and over a full year since I first contacted them, and (need I say?) no replacement Taurus.  Yesterday I contacted them again, and it seems we went backwards.  My conversation went this way.


(Taurus Rep)  At this point, all replacements are on hold until the repairs are completed. We in the process of having the firearm go through inspection. If the firearms needs a repair, it will be repaired and returned to you. If the firearm cannot be repaired, only then will the firearm be replaced.

(Me)  I was told it was going to be replaced last November. I was told to choose from a few models and have my Taurus dealer contact you. All that was done.

(Taurus Rep)  At this point, all replacements are on hold until the repairs are completed. We in the process of having the firearm go through inspection. If the firearms needs a repair, it will be repaired and returned to you. If the firearm cannot be repaired, only then will the firearm be replaced.

Note that her second response is another paste of the same text.  Finally she gave me this tidbit:

This website, in turn, says everything is on hold due to some sort of appeal to the class action lawsuit.  It seems that once the delay due to the appeal is over, there will be two choices
There are more details but the important point is that there is no fix for this.  The owner's choice is either get their gun replaced or take $200 for it; which is probably quite bit less than they paid for it.  Should they develop a fix, they'll fix the guns and we'll get our old guns back.  I would guess that considering they've been working on this problem for well over a year, if they don't have a fix by now, they probably won't come up with one.  There doesn't appear to be any way to know if the cash is faster than the replacement, so it's definitely not "take $200 now, or wait another six months for your gun".
As I said to the customer service rep, "so here we are a year later, and you tell me there's no fix and no schedule for when there will be one?"  Her answer, of course, was to refer me to the settlement web site.  I can understand that their assembly line may be set up to do some number of guns per month, and this may have put a burden of another 25 or 50% on them, but it's a short term problem.  Hire some contract workers, pay some overtime, do something to get over the rush.   Frankly, I'm more than a bit sick of it.  I consider that Taurus gone and unrecoverable, but I have to keep pushing this rope until I get a real answer. 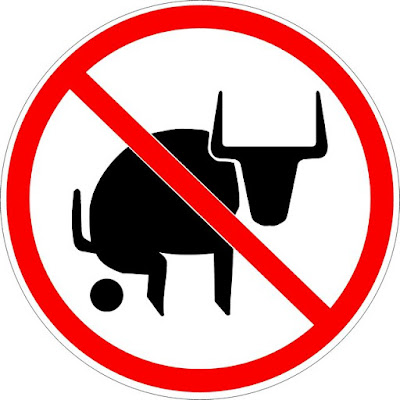 Considering the meaning of "Taurus", this seems appropriate.

Posted by SiGraybeard at 3:45 PM