When I last updated the progress on my CNC conversion, I had completed the wooden chip tray, although I hadn't painted it. The paint came Tuesday, and I eventually got three coats of paint on the inside and two on the outside.  What I've been doing since Tuesday, instead of cutting metal, is 3D modeling on the computer.  I want to be sure things are going to fit before I start moving 300 pound machines around.  I am well past my years of looking at 300 pound machines and boasting, "I can carry two of them and drink a beer".

I was able to model the G0704 with the plywood chip tray in place. 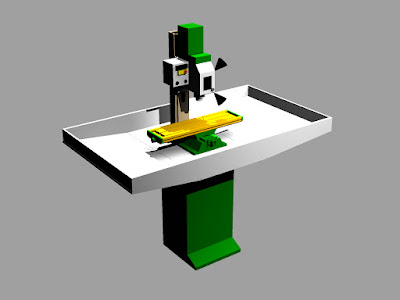 While a "realistic" model isn't really needed - details like the red "STOP" button on the motor speed controller take tiny amounts of effort but aren't necessary - the size of the base is critically important, as is the size of the tray.

Next I pulled out my floor plan layout that I originally created in '14 when the shop was being built, and then added to and tweaked as things were done.  The chip tray is 5'4" in the long direction, and 3' across.  I'd like two feet on each end, making 9'4" of floor space.  There's 6'8" between other stuff and the back wall.  Can't fit 9'4" with a shoehorn.   There's really not even enough room to put 2' of room on one end and the other against a wall, but that's a bad idea anyway.  Certainly while I'm building it (in place) and then while it's running, it's possible I'll need to get anywhere around it, and if I have to work on some side for a long period of time, I want a small chair (which is where my two foot border comes from).

So now comes moving things around in the software to try and get everything to fit better.  In this corner of my shop I have the G0704, and my Little Machine Shop 3450 lathe.  I'm not sure it's possible to work on both the mill and the lathe without popping a breaker (maybe with light cuts on both machines), but I do want to be able to easily move from one to the other.  I needed to do a model of a chair I could move around and get a feel for how it fits, so I went searching for a free 3D model of a chair and found one I could modify.  Which was good because I don't know if it was the original or the translation into Rhino, but it came into Rhino being 65 meters across the seat!  (Obligatory, "even Moochell's butt doesn't need 65 meters").

I ended up making several copies in different modifications of the chair to get a feel for how much room there really is.  I think this layout will work. 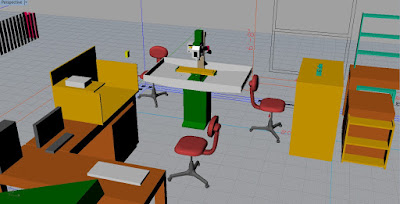 The bad part is that both heavy machines have to move.  I can't just put the mill in place without touching the lathe.  I have a shop crane to lift the heavy things, but it makes the job bigger.  A heavy duty extension cord or two may be needed.

The large gold/mustard colored rectangle to the right of the mill is the LMS lathe set up with operator's position on the left looking right and its headstock on the left.  As positioned right now, it could handle a rifle barrel 34 or 36" long.  To the lathe's right is a set of bookshelves in front for manuals and catalogs, a rolling cabinet and more benches behind them.  To the left and in front of the mill is where my Sherline micro CNC stuff is.  You might notice nothing has the level of detail the mill and chairs do, although the bookshelves are close.