Photo of the Day

I'm not quite sure how to credit it this.  It's from a CNN Story, and appears to be in the twitter feed of someone called @GoldboxATL. 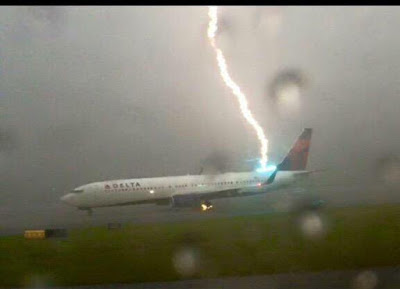 Delta flight 67, ATL to Las Vegas (LAS), a Boeing 737-900 (that means it's a new model of the 737) getting hit by lightning while queued up in the traffic Atlanta Hartsfield-Jackson gets on days like that.  I've personally waited about an hour and a half on the ground in Atlanta for the roughly hour long ride to the Silicon Swamp.  In this case, flight 67 took off around two hours late, but arrived in Lost Wages only about 20 minutes late (I assume they were re-routed more directly).  I'll conclude nothing was damaged on the plane.

The fact that planes get hit by lightning generally tends to really upset passengers, but the designers expect every commercial airliner to get hit by lightning once a year or more, depending on where they fly.  Aircraft that stay in the tropics are expected to get hit more often than those that fly in more northern latitudes, but since you'll never know where a given aircraft is flying, they're all designed to take more strikes.  I have to say that I was surprised as a newbie when I was told that my radios were not only expected to survive a lightning strike to the antenna, they were expected to play through it and not experience a processor reset or anything that cause the crew inconvenience - although there isn't a whole lot that can be done about the static noise hit.  We can do that in the laboratory, where we can make standardized, repeatable lightning strikes, but real lightning doesn't come in standard voltages and currents ("I'll take 5000 Amps, please").  It's always nice to get feedback from the field that things really are working the way they're supposed to.

Posted by SiGraybeard at 2:05 PM