Is the Stock Market Overvalued?

Is the stock market overpriced?  Are stocks way too expensive?  Or are we looking at another example of Bigger Fool Theory, which can be stated as buyers saying, "I may be a fool for paying this price for this stock, but there will be a bigger fool to sell it to next week for a higher price".

There are probably as many favorite metrics to track as there are market commentators, but one of the standards is the Price to Earnings ratio, the P/E ratio or even just PER  As the name implies, it's the price paid for a stock vs. the earnings it pays: price per share vs. earnings per share.  The value usually given is the average over the last year.  A Nobel Prize winning economist from Yale, Robert Schiller, came up with a slightly different way of looking at this called the Cyclically Adjusted Price to Earnings Ratio, or CAPE.  Sometimes you'll see it called the Schiller P/E Ratio.  Instead of just looking at the last year, the CAPE ratio factors in the average of the past 10 years of earnings and adjusts for inflation.

In either case, how do you know what a fair P/E or CAPE is?  As always, opinions vary, but this is the process of price discovery: in the ideal market transaction, each party thinks they got a good deal at an agreed upon price.  That's when the information processes in an economy are all working, something that hasn't been the case since the age of fiat money began in full swing when Nixon decoupled the dollar from gold.  Historically, the chart looks like this: 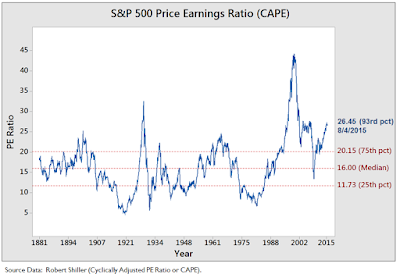 This is the S&P 500 CAPE dating back 134 years.  The median CAPE value for stock trades was 16.0; the upper and lower 25th percentile are clearly marked on the figure (Wikimedia Commons).  It might be interesting to look at a slightly differently annotated and smoothed version of the same data: 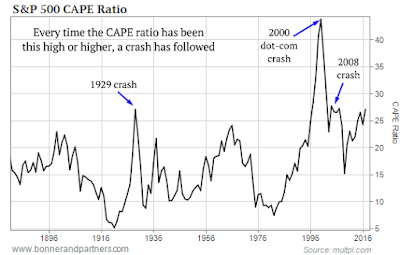 This chart appears to go back to 1886 (by eye), so it's 130 years.  In that 130 years, the only three times that the CAPE ratio got as high as it is today, a crash followed.  You'll note that the run-up to the peak in both 1929 and 2000 was quite a bit sharper; that is, a faster increase to the peak than we're having now and the crash came immediately, dropping the CAPE back near to valuations it was at before the run-up and crash.  Comparatively, in the mid 2000s, the CAPE stayed on a high plateau for a few years before the crash happened. The Federal Reserve's massive dumping of money to banks, with at least part of the intent of pumping up stock prices, made the CAPE go back to the same valuations by 2015 as in the (roughly, again by eye) 2003 to 2008 period.  It really seems quite phenomenally stupid, spending trillions to restore a CAPE that is historically nowhere near the median.  You would think they'd try to drive the prices of stocks closer to the median CAPE values.

As with all other indicators, there's debate over how good the CAPE is.  That's good.  From my viewpoint, any market near its all time high nominal prices (that is, not inflation-adjusted prices) is overpriced.  I think a drop of a couple of thousand points is more likely than a rise of a couple of thousand.  A drop of a few thousand points would be a buying opportunity.

Are we headed for another crash?  Could be.  The CAPE valuation argues we are.  Not the shape of the curve, just the number being over 25.  The value says nothing about the timing.  Since the 1929 and 2000 crashes had massive, sharp peaks that immediately preceded crashes, perhaps this time our slower climb to the current value really is different and it doesn't mean another crash.  In that case, the New Normal is that stocks are quite a bit more expensive than they used to be.  From 1881 until 1996, 115 years, CAPE ratios hardly ever went above 20, and only once went as far as about 28.  Since 1996, CAPE ratios have almost never gone below 20, have hit 45 and spent a lot of time above 25.  It's a different world.