The Unkindest Cut of All

Well, that's too Shakespearean.  It's not like it was "unkindest", but it was the hardest material I've had to cut.  Something ordinary machine tools won't touch.

In the G0704 CNC conversion I'm doing, I encountered something I wasn't comfortable doing.  A picture is worth a thousand words, so one view from the conversion DVD. 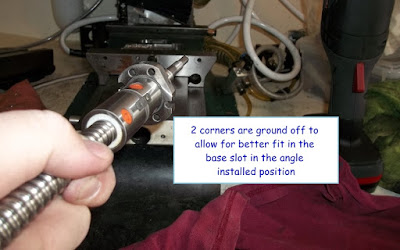 This is the Y axis ballscrew.  The flange of the ballnut is visible just above the centerline, on the ballscrew.  You can see that there's a vertical cut there, just left of the text box, cutting into the flange and cutting open one of the mounting holes.  Although not shown here, this gets attached to a mount that I machined a while back, and the whole thing sits in the base of the mill replacing the current hardware.  There's just one minor problem.  Across its widest points in this orientation, the width of that ballnut is 1.88".  The slot it moves in is 1.84".  I need to take off 50 or 60 thousandths - half on each side.

The "instructions" (as voice on included video) are to just take an angle grinder to it and take off a little.  Nothing critical.  Doesn't have to be pretty.  The only problem is I've never used one.  I need to cross that line at some point, but right now, I'd need to take that outside and do it on the porch, and that's easier said than done.  It needs to be held in something, some sort of vise, and that vise needs to be held by something.  Unlike the powder coat toaster oven, I can't just stick the vise on a shelf; it needs to be secure.  In case you're thinking this, I can't cut it on the milling machine itself, either.  The steel is so hard that a file just slides on it, not cutting at all.  Too hard to cut with a carbide cutter.

After puzzling over this cut for a few days (instead of just building a back porch workbench), I came up with a way to use things I already have.  In particular, I have some lapidary (rock cutting and polishing) equipment that includes a coarse diamond grinder.  This seemed to have a lot of advantages: it not only would grind away the steel, but lapidary equipment is water cooled, which keeps the dust from building up in places you don't want it, and keeps the work cool.  Plus, it's a diamond abrasive, which is much harder than the cutters in angle grinders or the carbide cutting tools.  It worked like a champ. 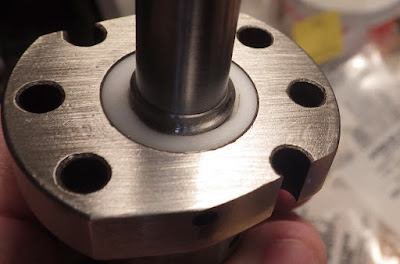 This is cut way deeper than it probably needs to be.  I made it look like the piece in the picture above.  Instead of being close to the 1.84 of the slot, it's more like 1.55.  Since it's based on the master version, it should work fine.

One more little obstacle out of the way.  Not only is every piece a puzzle, pretty much every cut can be a puzzle.