This was originally going to be a story put together by linking to Bloomberg.com, the business news folks.  Then I found they didn't want play nice and let me copy any of their text, and that got me thinking.  I said, "eff it anyway, why the hell should I send even one pair of eyes to Michael Freaking Bloomberg's site"?  I mean the guy's the most reliable fascist prick in American politics, he hates my guts as a gun owner, so why should help him even if it's a billionth of penny?

So I found other sources carrying the same story, and linking to Bloomberg.  You're an adult; if you feel like going to Bloomberg's site, go ahead, but I'll skip that.

I'm not sure if said hipster hasn't gone camping before or just hasn't taken his big bucks Tesla, but there's an interesting aspect to this story.  The Tesla Model S has a mode that users informally call "camper mode".  It configures the car in a low current consumption mode, allowing you to sleep in the back with the air conditioner on (although it appears to leave the running lights on).  It seems it would be most comfortable if you're under 5'6"; if you're bigger you'll have to sleep on your side with your knees bent.  Assuming you're in a campground, you'll be the quietest air conditioned camper in the place.


Because an electric car is silent when not moving, noise isn’t a problem and ventilation needn’t be an issue either. Assuming your battery won’t run down too far, you can set the climate control system temperature, fan, and filtration to your preferred levels. In Tom Randall’s test night, he found that the battery charge decreased from 40 percent to 33 percent. That still left him with a 90-mile driving range for the Model S configuration he was sleep testing.

It's not as easy as pulling into a campground and flipping a switch, but you can get there. There are online forums, tutorials, and an enthusiastic community.  There's even supposed to be an independent (that is, not Tesla-official) phone app that you can use to put your car in camper mode.

Growing up in Florida, I think of camping weather as November through March or April.  This time of year is too unpleasant, but I never had a camper with air conditioning.  I could see how having AC would extend my camping to other times of year.  Not that a Tesla is even remotely in my future! 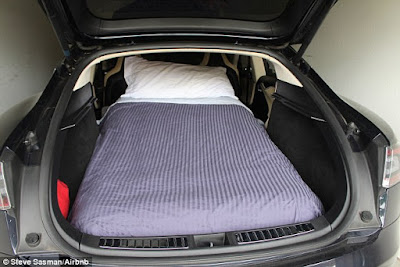 (From the Daily Mail - and a completely different, non-camping story.  Just so you see we're not talking luxury accommodations here.)