Today, it was reported that Gene Wilder passed away yesterday, at age 83, victim of the "complications of Alzheimer's disease".   Gene was one of the great comic actors of our time, and has brought me more smiles and laughs over the years than I can ever recount.


Wilder's nephew Jordan Walker-Pearlman said the comedy legend died late Sunday in Stamford, Conn. from complications from Alzheimer's disease, a condition the actor kept private for three years so as not to disappoint fans.

It's hard not to think of the roles he played that became favorites at a time like this.  Headlines referred to his roles in "Young Frankenstein" and "Willy Wonka and the Chocolate Factory", but the first role I saw him that made me laugh and that's still easy to remember 44 years later, was as Dr. Ross in the otherwise-forgettable 1972 Woody Allen film "Everything You Wanted to Know About Sex But Were Afraid to Ask" (if you're under 50, it was the title of a popular book at the time).  Dr. Ross is a serious doctor of some sort, when a Greek patient comes in to talk about problems he's having with Daisy - his partner.  Dr. Ross eventually asks to meet Daisy, only to find she's a sheep.  He asks to see Daisy alone, falls for her, and the few minutes the movie devotes to this skit traces his descent from pinnacle of the medical profession to bum.   The subtlety Wilder plays this part with is just awesome to watch.  Truly a master of his craft, even at this young age. 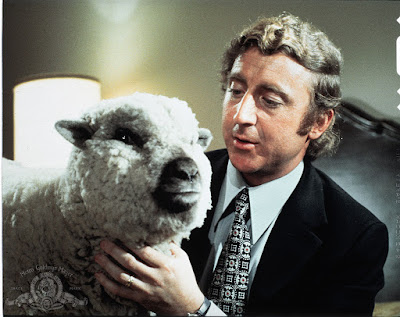 I'm one of "those guys" who pretty much knows the complete dialog of Young Frankenstein, and saw most of his movies.  He was one of those rare talents who could almost carry a movie himself.  Thanks for all the good times, Gene.