Tales From the Over Regulated State # 21 - Wild Animals Take Part in Interstate Commerce?

Watts Up With That is one of my regular reads because it's not just a great place to catch up on the latest summary of the climate insanity, it's a great place to read a variety of topics that show up from time to time, and the comments are relatively sane compared to most places (where the topic usually becomes a stupid political attack within the first five comments).

This week, there was an article on Gray Wolves, and the main point of the article is that we may tend to think that there's a rather crisp, definition for what a biological species is; a definition that is broadly agreed-upon, but that isn't the case.  Along the way (actually in the comments) I ran into the story for this episode of TFORS.  While this is episode 21 of the series (which I didn't number until recently) it fits closely with #19 from last December, about how your property isn't your own if an endangered or protected species is involved.

To begin with, they point to an article in the NY Times that says according to an in-depth study of their DNA,


“The first large study of North American wolf genomes has found that there is only one species on the continent: the gray wolf. Two other purported species, the Eastern wolf and the red wolf, are mixes of gray wolf and coyote DNA, the scientists behind the study concluded.”

Bridgett M. vonHoldt of Princeton University, a DNA specialist who studies the genome of the canids (mammals of the dog family – Canidae):  that is domestic and wild dogs, wolves, foxes, jackals and dingoes, is the lead author behind this study.

At this point, it's pretty healthy to be saying "so what?".  The so-what is that the Federal Government, through the actions of the Usual Suspect agencies has been working on a program to protect the red wolf and conducting a Red Wolf Recovery Program.  In my mind, it's hard to declare a species to be endangered when it isn't actually a species.  In the same NY Times, two months prior, there was piece saying,


“Conservation groups submitted an emergency petition last week requesting that the United States Fish and Wildlife Service increase protection for the only wild population of red wolves left in the world.”
…
“It also seeks an upgrading of the status of red wolves, which are endangered, from “nonessential” to “essential.” The change in status would grant reserved habitat to the species and require consultations with biologists over how changes to land use would affect the wolves.”

Dr. vanHoldt’s study not only identified the three canids (Grey, Eastern and Red wolves) as a single species (albeit, the latter two are wolf-coyote hybrids - in domesticated dogs we call this a breed), but her paper states bluntly:


“The red wolf was listed as an endangered species in 1973, initiating a captive breeding program by the USFWS. The program began with 12 of 14 founding individuals that reproduced, selected from a panel of several hundred captured individuals that were thought to represent the ancestry spectrum ranging from coyote to pure red wolf and various admixtures of the two forms. These 12 founders were considered to be pure red wolves based on phenotypic characteristics and the lack of segregation of “coyote-like” traits in their offspring. The descendants of these founders defined the ancestry of the several hundred red wolves produced by the captive breeding program and have been the source for a single reintroduced population in eastern North Carolina.”

Since those members of a small population of wild red wolves were captured in the '70s and used to breed a new population, the reality is that the red wolf is not just a wolf-coyote cross, it's a man-made breed at this point.   So would the fact that the species the conservationists wants to protect is really a "mutt" of two (or more) other species cause them to say, "oh... well, that's clearly not what the Endangered Species Act is for, so we'll go home now"?  Of course not!  Here's where the story gets a bit longer, and switches over to the comment by Watts Up With That reader wrusssr.

Let's go back to the '70s and the captive breeding program to rescue the red wolves.  The wolf population was burgeoning and the US Fish and Wildlife Service (FWS) proposed introducing their pen-raised mongrels in Kentucky and Tennessee.  State officials, ranchers, and others in those states met them at the gate and told them hell no; they didn’t want the wolves.  Faced with local opposition, the FWS did what any fed agency does, they looked for a way to impose their will around the problem, deciding to release the red wolves on federal lands in the Kentucky/Tennessee/North Carolina area.

I'm sure you're guessing at this point that wolves don't read signs very well and didn't stay in the parks.  Exactly.   While the original population had radio collars (so "if they go out of the federal land, we'll just round them up") , but they quickly bred new generations of collarless wolves that began scouring private land for livestock meals – some more than 100 miles away.  Just like real wolves do in Idaho, Oregon, Montana and pretty much everywhere.  A landowner who shot one threatening his livestock was fined and required to feed captive red wolves for a year as his penance for not being environmentally sensitive enough.

Now it turns into a Federal case; more specifically states rights vs. the feds.  A lawsuit — Gibbs vs. Babbitt — was filed challenging the FWS’s authority to prevent landowners from killing wolves that were killing their livestock. This suit was filed in federal district court for the eastern portion of North Carolina; arguing citizens had the right under state law to protect their property from marauding wolves, the Endangered Species Act notwithstanding.  Once this got into court, the FWS lawyers argued straight-faced that ranchers and farmers killing wolves that killed livestock and wildlife on their property were “ . . . interfering with interstate commerce, and thus violating the Commerce Clause.”

Wait... A homeowner killing a wolf on their private property to protect the life of their private property violates the Interstate Commerce Clause?  How does a wild animal create interstate commerce?  Contract lawyers for FWS argued that tourists generated commerce when they came from places like New York to North Carolina to “hear the ‘wolves’ howl.”  The problem they faced was that no one could prove that anyone actually had come to North Carolina to hear the wolves' howl.  But critical facts like that aren't going to affect a Federal Judge!  Of course the Federal District Court for the eastern portion of North Carolina ruled in the FWS' favor!  The inevitable appeal to the 4th U.S. Circuit Court of Appeals resulted in a split decision, which agreed with the lower court.  Wolves are now agents of interstate commerce. 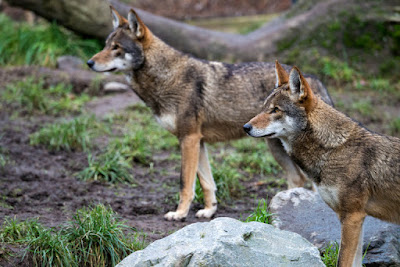 Two red wolf mutts being all interstate commerce-y.  I'll just close this with a quote from the first comment to this piece on WUWT:


There will be no peace, no justice, and no economic growth until the last lawyer is strangled with the entrails of the last environmentalist.